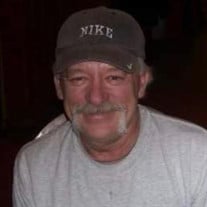 WINCHENDON- Russell Brooks, 64, of Winchendon, died Monday, July 22, at Heywood Hospital, after a long battle against cancer. Russell was born September 25, 1954, in Gardner, son of the late Phillip and the late Theresa (Saari) Brooks. Russell was a fourth generation Mason and a master at his craft. He was a very hard worker but also made sure to enjoy his passion of being outdoors. He was very adventurous, athletic, and competitive. In 1981, he and many of his friends from Gardner earned a place in the Guinness Book of World Records for the longest softball game played (56 hours and 10 minutes). Russell was always happy and interested to play a game of corn hole, horseshoes, and/or darts. Russell leaves his wife of 44 years, Janet (Parker) Brooks; his two children, Heidi Tatro, her husband, Jeffrey Tatro of Gardner, and his son Austin Brooks and his significant other, Valerie Whitney of Gardner; his three beloved grandchildren, Cyrus Tatro, Lucas Tatro and Alivia Brooks; Three brothers, late Rodney (Rubber) Brooks, Ricky Brooks and Roger Brooks; four sisters, Patricia Mills, Carmela Boucher, Sherry Hanks, and Linda Allen; his in laws, Bob, Ron, Elizabeth and (Janet’s twin) Jean Menard; As well as many other aunts, uncles, cousins, nieces, nephews and friends. Calling hours are Saturday, July 27, from 10:00 A.M. to 12:00 P.M. with the funeral Beginning at 12:00 Noon, at Mack Family Funeral Homes, Lamoureux-Smith & Poliks Chapel, 105 Central St., Gardner. Burial will be private. To send an online condolence, please visit www.mackfamilyfh.com.

The family of Russell Brooks created this Life Tributes page to make it easy to share your memories.