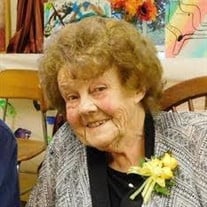 TEMPLETON – Shirley A. (Henshaw) Barnes, 92, died Sunday, Sept. 1 in Athol Memorial Hospital after an illness. She was born Oct. 30, 1926, the daughter of Charles R. and Mildred C. (Brown) Henshaw of Templeton, and was a resident of Templeton for most of her life. She leaves her husband of 70 years, George W. Barnes Sr., three brothers, Ralph Henshaw and his wife, Mildred, and Roger Henshaw, both of Templeton, and Kirke Henshaw and his wife, Nancy, of Chesterfield; five children, Kathleen J. Barnes and her husband, Paul Krysiak, of Tolland, Conn.; Thomas Barnes and his wife, Robin, of Petersham; George Barnes Jr. and his wife, Maria, and Mary Barnes, all of Templeton; and Charles and his wife, TammyJean Gonzalez-Barnes, of Wasilla, AK. Also, grandchildren Thomas Barnes II and his wife, Shannon, of Leominster, Rebecca Shersnow and her partner Earl Sweat of Phillipston, Michael Shersnow of Shutesbury, and Elizabeth Barnes of Lafayette, Ind.; and great-grandchildren, Cody and Chase Barnes of Leominster and Elijah and Gwen Shersnow of Shutesbury, cousins and many nieces and nephews. She was predeceased by brother C. Milton Henshaw and his wife, Priscilla, of Maine, sister Edna Haley and her husband, Arnold, of Phillipston, her sister-in-law Lorna Henshaw of Templeton, and grand-daughter-in-law Tanya Shersnow. She was a graduate of the former Templeton High School, class of 1944, and attended Bay Path College. Shirley worked for 33 years as a correspondent for the Telegram & Gazette, covering Templeton news. She had previously worked at Adams Printing in Templeton and as a school bus driver for Henshaw Service. She was a member of First Church of Templeton for much of her life. She was a member of the Narragansett Historical Society, and of the General Federated Woman’s Club of Templeton for 70 years and also the Woman’s Club in Pepperell and the Northeastern Conn. Woman’s Club; and. She served the town of Templeton for many years as a member of the Council on Aging and as a deputy warden at the polls. She volunteered as a plane spotter during World War WWII. She was a Girl Scout leader for many years and active in Dollars for Scholars musicals, the Mr. and Mrs. Club and the Templeton Grange. Funeral services will be Saturday at 11 a.m. in First Church of Templeton, 1 Wellington Road, The Common, Templeton. Calling hours will be Friday from 5 to 7 p.m. at Mack Family Funeral Homes, 105 Central St., Gardner. Burial will be at a later date. Donations in her memory may be made to the Narragansett Historical Society, 1 Boynton Road, Templeton, MA 01468 or First Church of Templeton, 1 Wellington Road, Templeton, MA 01468.

TEMPLETON &#8211; Shirley A. (Henshaw) Barnes, 92, died Sunday, Sept. 1 in Athol Memorial Hospital after an illness. She was born Oct. 30, 1926, the daughter of Charles R. and Mildred C. (Brown) Henshaw of Templeton, and was a resident of Templeton... View Obituary & Service Information

The family of Mrs. Shirley H Barnes created this Life Tributes page to make it easy to share your memories.