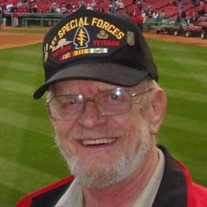 BALDWINVILLE- Robert C. Rose, Jr., 76, of Baldwinville, died Saturday, April 13, in his home. He was born January 25, 1943, in Worcester, son of the late Robert C. Rose, Sr. and the late Pauline (Stedt) Rose. Robert served three tours in Vietnam with the Army Special Forces and earning three Bronze Stars, two Presidental Unit Citations and four Purple Hearts . Robert was a civil engineer for the Army Corps of Engineers retiring in 1993 for medical reasons. He was the head engineer for the South East Lighthouse Project on Block Island. This feat was captured in a National Geographic documentary. He was also a talented carpenter owning and operating MJR Construction which his son now owns. He also owned and operated Bob Rose Sound System. Robert served on the Templeton Planning Board. He was a Red Sox and Patriots fan. Most importantly, he was a loving father and grandfather. His wife, Judith (Binnall) Rose, died in 2014. He was also predeceased by his daughter, Jennifer Rose in 1976. He leaves four sons, Brent Rose and his wife, Andrea of Holden, Richard Rose and his significant other, Heather Ruland of Gardner, Timothy Rose of Harwich, and Martin Rose and his wife, Stephanie McIsaac of Plymouth; eleven grandchildren, Elizabeth Rose and husband, Michael Duncan of Tiverton, RI, Rachael Rose and significant other, Josh Martin of Athol, Dylan Rose of Plymouth, Carlye Rose of Gardner, William Rose of SC, Caleb Rose of Gardner, Adam and Macy Rose, both of Winchendon, Logan Rose of Plymouth, Rachel and David Boyer, both of W. Boylston; one brother, Donald Rose of Holden; one sister, Sally Bond of Holden; several nieces and nephews; and one great grandson who is on the way and he was very excited about. Calling hours are Thursday, April 18, from 5:00 to 8:00 P.M. at Mack Family Funeral Homes, Lamoureux-Smith & Poliks Chapel, 105 Central St., Gardner. The funeral will be held Friday, April 19, at 11:00 A.M. in the funeral home. Burial with military honors will follow in St. John’s Cemetery. In lieu of flowers, memorial contributions may be made to the Wounded Warrior Project, PO Box 758517 Topeka, Kansas 66675-8517 or woundedwarriorproject.org.

The family of Robert C. Rose Jr. created this Life Tributes page to make it easy to share your memories.