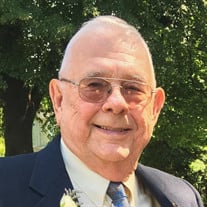 On Friday, May 28, Richard “Bud” Gagnon, 91, of 307 Intervale Ave, Athol, MA died after a short stay at Heywood Memorial Hospital in Gardner. Richard was born on April 25th, 1930 in Montague, MA to Joseph P. Gagnon of New Brunswick, Canada and Helen (St.Germain) Gagnon of Montague. He married the love of his life, Elizabeth A. Waters of Orange, MA on October 13, 1951. “Bud and Betty” were married for 62 years! Richard grew up in Greenfield and graduated from Greenfield High School in 1948. He served in the U.S. Navy during the Korean War from 1949-1953 and resided in Athol since 1955. He worked at Massachusetts Electric Company for 38 years as a storekeeper/stockman and retired in 1990. Richard was a member of Our Lady Immaculate Church where he taught CCD. He was president of the Athol Booster’s Association and coached and served on the board of the Chuck Stone Little League. He was Commander of the Edward H. Phillips American Legion Post #102 as well as a member of the organization for Disabled American Veterans. He also served on the Town of Athol Finance Board. Richard was honored as the Grand Marshall in the Athol Memorial Day Parade in 2017 and has always been supportive of veteran’s programs. In his leisure time, Richard was an avid golfer, he loved to cook, and he enjoyed writing poems for friends and family. He appreciated music, reading, and the art of telling a good joke. Throughout his life, Richard was a dedicated husband, father, grandfather and great grandfather. He cherished spending time with his family, and his family is truly his legacy. Richard is pre-deceased by his wife, Elizabeth A. (Waters) Gagnon, a sister, Joan Wood of Sandy Spring, MD, a sister, Ann Cornell of Bristol, CT. and a niece, Beth Cornell of Salem, MA. He is survived by his sister Christine Mastaler and her husband Greg Mastaler of Pinehurst, NC as well as 2 other brother-in-laws, Daniel Cornell of Salem, MA and Delmas Wood of Sandy Spring, MD. He is also survived by his 4 children, Peter Gagnon and his wife Julie (Kamila) of Westminster, MA, Mark Gagnon and his wife Pam (Corriveau) of Athol, Nancy Gagnon and her husband Robert Burch of Putney, VT, and John Gagnon and his wife Patricia (Colbourn) of Arnold, MD; nine grandchildren, Marcie, Kristie, Jeremiah, Elizabeth, Caitlin, Ryan, Anna, Isabella, and Jack, and 11 great grandchildren, Gabriella, Julianna, Tyler, Makayla, Julia, Kirsten, Kamila, Nathaniel, Jonathan, Sarah, and Daniel. He is also survived by his cousin Judy Gagnon of Greenfield and several nieces and nephews. Calling hours will be held on Tuesday, June 22 from 9:00-10:30 at Fiske-Murphy & Mack Funeral Home, 110 New Athol Rd, Orange which will be followed by a Memorial Mass at our Lady Immaculate Church, Athol at 11:00. Richard will be buried at Silver Lake Cemetery at a later date. In lieu of flowers, donations can be made to Montachusett Veterans Outreach Center, 268 Central Street, Gardner, MA 01440 To leave an online condolence please visit www.mackfamilyfh.com Mack Funeral Homes is assisting with arrangements.

The family of Richard Joseph "Bud" Gagnon created this Life Tributes page to make it easy to share your memories.