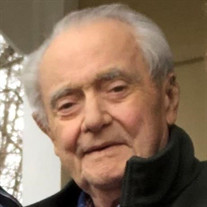 ATHOL- Kenneth R. White, 79, of Athol, died Tuesday, April 2, at Athol Memorial Hospital, after an illness. Kenneth was born April 7, 1939, in Gardner, son of the late Kenneth L. and Lillian (Crossley) White. He grew up in Gardner until moving to Athol when he was a freshman, graduating from Athol High School in 1957. He entered the U.S. Army in 1957 and completed basic training at Ft. Dix, NJ. After attending Crane Shovel School at Ft. Leonardwood, MO, he was stationed at various bases before being transferred to Korea for 13 months as a crane shovel operator, working on air fields all over South Korea. After leaving South Korea, he was then sent back to Ft. Heestii in Virginia and honorably discharged in October 1960. Subsequently, he was called back to active duty in October 1961 during the Cuban Missile Crisis and was stationed at Ft. Bragg, NC. He was again discharged in October 1962. Kenneth was a truck driver and Operations Manager for Girardi’s Distributors and a truck driver for R&M Leasing before retiring in 2006. He was a member of Athol Congregational Church, the Athol Lions Club, and a member of the Athol-Orange Elks for 51 years. Family was his priority. He attended all of his children and grandchildren’s sporting events both near and far. He also coached Little League and Babe Ruth baseball when his children were participants. He leaves his wife of 55 years, Sandra R. (Thrower) White; one son, Mark White and his wife Lynne of Orange; one daughter, Cami Fisk and her husband, Steven of Bellingham; two granddaughters, Courteney and Lauryn White; his twin sister, Phyllis Goodwin and her husband Robert of Canandaigua, NY; sisters in law, Connie White and Linda Jillson; and many nieces, nephews, and friends. He also leaves his beloved granddogs, Koopa, Chance, Kaya, and Bandit. A celebration of life will be held Saturday, April 27, at 1:00 P.M. at the Boiler Bar & Grill Banquet Hall. In lieu of flowers, Memorial contributions may be made to the Athol-Royalston Athletics Association, c/o Athol high School, 2363 Main St, Athol, MA 01331 or the Mahar Boosters Club, c/o Mahar Regional High School, 507 S Main St, Orange, MA 01364. To send an online condolence, please visit www.mackfamilyfh.com. Fiske-Murphy & Mack Funeral Home, 110 New Athol Road, Orange is assisting the family.

ATHOL- Kenneth R. White, 79, of Athol, died Tuesday, April 2, at Athol Memorial Hospital, after an illness. Kenneth was born April 7, 1939, in Gardner, son of the late Kenneth L. and Lillian (Crossley) White. He grew up in Gardner until moving... View Obituary & Service Information

The family of Kenneth R. White created this Life Tributes page to make it easy to share your memories.