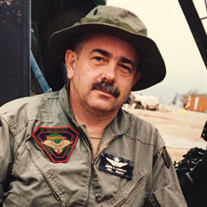 John A. Lambert died suddenly on November 13th, 2019 at the age of 73. John is survived by his wife Mare Hawthorne and her daughter Katelyn of Athol MA; his children Steven Lambert of Boston MA; David Lambert and wife Rebecca Steil-Lambert of Holden MA; Laura Lambert and wife Donna Amistadi of Ashburnham MA. He also leaves his grandchildren, Noah, Gia, Gianna and Mateo and Logan. He is survived by his sisters Joan Joncas of Wolfeboro NH; Norma Harris of Londonderry NH; Nancy Lambert of Cape Neddick ME, along with his former wife Judy Lambert of Palm Harbor, FL. John was born and raised in Lawrence MA and resided in Townsend MA for many years where he raised his family. In retirement, he lived in Athol MA. John was a Vietnam Veteran and Helicopter Pilot serving in the US Army and Army Reserve for 31years, retiring as a Master Army Aviator and Chief Warrant Officer (CW4). John worked for 25 years at Fort Devens MA as a Flight Test Pilot and Supervisory Aircraft Pilot at Moore Army Airfield. Later, he was the Staff Operations Officer at the 94th Regional Readiness Command. John was a member of the Veterans of Foreign Wars and the Vietnam Helicopter Pilots Association. In retirement, he was an active member of Town of Athol Capital Planning Board. He always appreciated that he was able to do something he loved and was able to fly for so many years. He was a caring and loving husband, brother, father and grandfather. He was also a loyal and dependable friend, especially to his fellow veteran aviators. John had love for the outdoors, camping, hiking, travel and history. His family and friends will forever remember his guidance, support, loyalty, kindness and sense of humor. In lieu of flowers John requested that donations be made to The New England Home For Veterans at nechv.org Calling hours are Wednesday, November 20, from 4:00 to 6:00 P.M. at Fiske-Murphy & Mack Funeral Home, 110 New Athol Rd., Orange. The funeral will be held Thursday, November 21, at 3:00 P.M. at the Massachusetts Veteran’s Memorial Cemetery, 111 Glenallen St., Winchendon.

John A. Lambert died suddenly on November 13th, 2019 at the age of 73. John is survived by his wife Mare Hawthorne and her daughter Katelyn of Athol MA; his children Steven Lambert of Boston MA; David Lambert and wife Rebecca Steil-Lambert... View Obituary & Service Information

The family of John A. Lambert created this Life Tributes page to make it easy to share your memories.