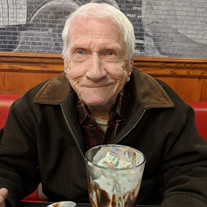 ATHOL - Howard M. Wilson, age 95 years young, of Athol, left us to join his beloved wife, Janet, on September 11th, 2019.  He resided at Applewood Home for Elders.   Howard was born January 29th, 1924 in Athol, MA.  He is the son of the late Robert Wilson and Irene G. (Mallinson) Wilson of Athol.   Howard grew up in Athol and graduated from Athol High School in 1942.  He served in the United States Army during World War II.  Howard was an active member of the community, serving on the board at Athol Historical Society for many years. He was a member of the Knights of Columbus, the Shriners and the Freemasons with his father and brother.   His hobbies included traveling with his wife, Janet and friends, running his train sets and spending time with family and friends. Howard was employed at L.S. Starrett Company in the administrative offices and retired from his position with them.   He is survived by two nieces, Dorothy Lefebvre (Wilson) of Lewiston, Maine; Darlene Castellano (Wilson-McNeice) of Virgina Beach, Virginia and several great nieces and nephews including, Michael Wilson of Wilder, VT, Richelle Stacy (Lefebvre) of Lewiston, Maine and Heather Moorehead (McNeice) of Stafford, Virginia.   He is pre-deceased by his brother, Herbert Wilson and nephew, David Wilson.   A graveside service will be held on Saturday, September 14, 2019 at 11:30am in Highland Cemetery, Hillside Terrace, Athol.   To send an online condolence please visit www.mackfamilyfh.com. Higgins-O’Connor Funeral Home, 146 Main St., Athol, is directing arrangeme

The family of Howard M. Wilson created this Life Tributes page to make it easy to share your memories.