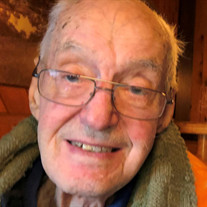 GARDNER- George J. Black, 94, of Gardner, died peacefully in Highland, CA on October 7. Mr. Black was born in Gardner in 1925, son of the late George Ashton and the late Elizabeth Hoadley Black, both longtime residents of Gardner. Attending Gardner schools, he served in the Army during WWII being wounded in early 1945 in the Rhineland. After discharge from a military hospital in June 1946, he attended Harvard College, from which he graduated in December 1949. The following month, Mr. Black moved West to southern Montana to work in a country bank; then going to Lodge Grass, MT on the Crow Indian Reservation to teach in their high school; and from there to the high school in Big Horn, Wyoming. In the summer of 1956, Mr. Black returned to Gardner and began teaching at Gardner High School. He remained there for 15 years, when he left teaching to become self employed as a private investor, which occupation he remained engaged until his death. His wife, Catherine (Moran) Black, died in 1982. He leaves two children, Catherine A. Black of Quincy, G. John Black of Highland, CA; daughter-in-law Joann and grandchildren, Omar, Oniel, Kyla, Kiana and Josh. A memorial service will be held Saturday, October 26, at 2:00 P.M. at Mack Family Funeral Homes, Lamoureux-Smith & Poliks Chapel, 105 Central St., Gardner. Burial will be private. In lieu of flowers, memorial contributions may be made to the Levi Heywood Memorial Library, 55 W. Lynde St., Gardner, MA 01440.

The family of George J. Black created this Life Tributes page to make it easy to share your memories.