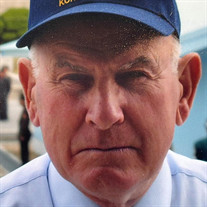 TEMPLETON – George W. Barnes Sr., 96, died Thursday, Aug. 26, in Athol Hospital after an illness. He was born Aug. 18, 1925, in Hardwick, son of William B. and Emma C. Barnes of Petersham and lived for many years in Templeton. He was a graduate of Petersham High School and earned a bachelor’s degree in engineering from Purdue University in Indiana. He was employed as an engineer at Norton Company in Worcester, travelling nationally and internationally for his work. Weekends and evenings he built a large house in which he and his wife, Shirley, raised their five children. He was a Korean War veteran, serving with H-Company, 3rd Battalion, 7th Marine Regiment. After the war, he served for many years with the Marine Corps Reserves, retiring as a Lieutenant Colonel. He was a member of the Korean War Veterans Association of Worcester County, the Worcester Korean War Memorial of Central MA Committee, American Legion Post 373 in Baldwinville, the Pequoig Detachment of the Marine Corps League in Athol, and the First Marine Division Association. For many years he attended reunions of Korean War veterans of H-Company, 3rd Battalion, 7th Marine Regiment. He was an avid skier and a longtime member of the National Ski Patrol, working at Mount Watatic and Wachusett Mountain. He served his community on school building committees, the Dollars for Scholars musicales in Templeton and playing clarinet in the Petersham Brass Band. He led Templeton Boy Scouts on many 50-mile hikes on the Appalachian Trail. He was an avid hunter and fisherman, traveling to Maine, Montana, and Canada to enjoy his sports. Mr. Barnes was a lifelong baseball fan, having grown up on the sandlots of Petersham; even in his final days he followed the trials and tribulations of the Red Sox. He was also a football and hockey fan, spending many evenings watching games with his son Thomas. He was an avid reader and gifted writer, having consulted on several books about the Korean War. After retirement, he visited many countries, including Australia, New Zealand, China, South Korea and Ireland. He leaves two daughters, Kathleen J. Barnes and her husband, Paul Krysiak, of Tolland, Conn., and Mary Barnes of Templeton; three sons, Thomas M. Barnes and his wife, Robin, of Petersham, George W. Barnes Jr. and his wife, Maria, of Templeton, and Charles W. Barnes and his wife, of Wasilla, Alaska. Also, grandchildren, Thomas M. Barnes II and his wife, Shannon, of Leominster, Rebecca M. Shersnow and her partner, Earl Sweat, of Phillipston, Michael P. Shersnow of Shutesbury, and Elizabeth E. Barnes of Lafayette, IN; great-grandchildren, Cody and Chase Barnes of Leominster and Elijah and Gwen Shersnow of Shutesbury, and many nieces and nephews. He was predeceased by his wife, Shirley A. (Henshaw) Barnes, brother, James Barnes, and grand-daughter-in-law Tanya Shersnow. Calling hours will be Thursday, from 5 to 7 p.m. at the Lamoureux-Smith & Poliks Chapel of the Mack Family Funeral Homes, 105 Central St., Gardner. Funeral services will be Friday at 10:00 a.m. in Holy Cross Church, 17-99 Lake Ave., East Templeton. Burial will follow in East Street Cemetery, Petersham, MA Donations in Mr. Barnes’ memory may be made to the Korean War Memorial of Central MA Inc., P.O. Box 16568, Worcester, MA 01601. To leave an online condolence please visit www.mackfamiilyfh.com Kevin J. Mack and Walter C. Taylor, funeral directors

The family of George W Barnes Sr created this Life Tributes page to make it easy to share your memories.