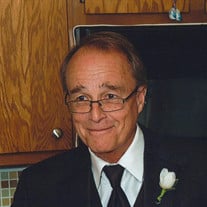 Gary E. Cole, 71, of 461 Chase Rd. in Athol, died at home surrounded by his family on Sunday, May 26, 2019 after a battle with pancreatic cancer. Born in Montague, Mass. on August 11, 1947, Gary was the son of the late Hervey L. and Irene F. (Long) Cole. Gary graduated from Mahar High School in 1965 and received an associate's degree from Greenfield Community College in 1967. Later that year he enlisted in the U.S. Navy, serving as a hospital corpsman during the Vietnam War before being honorably discharged in July 1973. He was later employed by the L.S. Starrett Company for 43 years before retiring in 2017. Gary loved to be outside, and could often be found puttering around his property doing yard work, taking walks, washing his car and spending time with his family. He was an avid sports fan who rarely missed a Red Sox game or one of his children's sporting events. In his younger years he also enjoyed playing in several area softball leagues. Gary is survived by his beloved wife of 44 years, Linda (Gibbs), and his children: Eric Cole and his wife Susan Clarke of Jackson, Wyo.; Benjamin Cole and his wife Lea (LaFountain) of Orange; Elizabeth (Cole) McLean and her husband Jeffrey of Litchfield, N.H.; and Lisa (Cole) Goheen-Cole and her wife Jessica of Erving. He will be greatly missed by his adoring grandchildren: Leif Cole, Jacob McLean, Eva Cole, Duncan Cole, Benjamin Cole and Judith McLean. Besides his parents, Gary was predeceased by his sister, Sandra (Cole) Mattson in 1987. Calling hours will be Friday, May 31, from 5-7 p.m. at Fiske, Murphy & Mack Funeral Home 110 New Athol Rd. in Orange. A Memorial Service will be held Saturday, June 1 at 10 a.m. in the Funeral Home, followed by a private burial. To leave an online condolence please visit www.mackfamilyfh.com Fiske Murphy & Mack Funeral Home is assisting the family with arrangements.

The family of Mr. Gary E. Cole created this Life Tributes page to make it easy to share your memories.