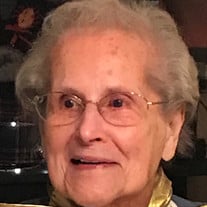 ATHOL - Evelyn (Desrosier) King, 100 of 134 Drury Ave., Athol, died Saturday, August 10, 2019 at home. She was born in Athol, on March 17, 1919, the daughter of the late Wilfred H. and the late Leona (Hachey) Desrosier. She lived in Athol all of her life graduating from Athol High School in 1936. She spent over 52 years working in town government. She began her work as a secretary for the Superintendent of Schools for several years. She worked for Athol Savings Bank for 3 years and served on two PTA's for several years. She was elected to the School Committee and served from 1960 to 1967, and was the first woman chairman. She was Athol's first woman Zoning Committee Agent 1996-1969, and served on the Board of Selectman 1977 to 1989 being the first woman Selectman and Chairman of Selectman, also served as Clerk of Board of Selectman 1965-1968. She volunteered for various committees including advocating Athol to membership in regional vocational school district, guiding the Athol welfare office to a state-run system and Montachusett Oppurtunity System. She worked in the Head Start Program as coordinator of the Athol-Templeton Region, headed Athol High School Alumni Association in 1973. She was appointed health services coordinator for the former North Quabbin Health Plan for 8 years. She was the director of United Way, and a Corporator of Athol Savings Bank and Athol Memorial Hospital. She studied at UMass, Springfield College, Mt. Wachusett Community College and later studied real estate through Lee Institute, attaining her state license as a real estate sales person. She was a member of Our Lady Immaculate Church and was very active serving on several parish groups and other church activities. She leaves one daughter, Sally Kamerbeek of Meriden, CT; four sons, Michael J. King and his wife Marie of Athol, David W. King and his wife Connie of Athol, Roger F. King of Athol, Bruce J. King and his wife Joanne of Athol; one sister, Rita Grimes of Athol; one brother, Francis Desrosier of Selbyville, DE; 10 grandchildren, Matthew King, Amanda King, Amy (Kamerbeek) Aresco and her husband Scott, Sarah King, Christoper Kamerbeek, Peter King, Henry King, Hannah (King) Kraus and her husband Dan, Jessica King, Kayla King; four great grandchildren, Darlene Aresco, Zachary Aresco, Randall Aresco and Carter Colonero. She was predeceased by her husband of 58 years, William R. (Hans) King, by her son, Robert King and by her brother, Norman Desrosier. A Mass of Christian Burial will be held Tuesday, August 13, 2019 at 11:00 am in Our Lady Immaculate Church, 192 School St., Athol. All attending are asked to go directly to the church. Burial will follow in Gethsemane Cemetery. There are no calling hours. In lieu of flowers, the family suggest memorial donations be made in her memory to the Athol YMCA, 545 Main St., Athol, MA 01331. For more information or to sign our online guest book please visit www.mackfamilyfh.com. Fiske-Murphy & Mack Funeral Home 110 New Athol Road, Orange is directing arrangements.

The family of Evelyn King created this Life Tributes page to make it easy to share your memories.