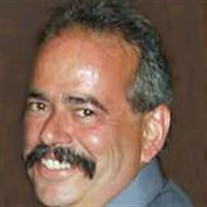 David A. Wright (Dave), 58, of Gardner, MA passed away very unexpectedly at UMass Memorial Medical Center in Worcester on April 15, 2020 after suffering a stroke on April 11th. David was born in Gardner, MA on March 20, 1962 to Shirley (Springer) and Dana Wright. He graduated from Gardner High School and following his passion for cars, attended an accredited school and became licensed as an auto body technician. David worked in the auto body field early in his career, later pursuing his appraisers license which became his life-long career. For more than 20 years, David was a supervisor for Advanced Appraisal Service. David had many things he was passionate about. First and foremost, he loved spending time with his children, grandchildren and close family members, who always came first. The one exception was during a Patriots game, he never missed one. Football was the sport he most enjoyed and where he preferred to socialize. He could be quite loud during games, which many will attest to. He was never one to be quiet about his passions or beliefs. David loved being outdoors and cooking on the grill for his family. He was an amazing cook and would whip up delicious dishes for parties and family gatherings. He spent many weekends fixing cars for friends and family. Being the person he was, family and friends would turn to him for help or advice. He could always make you laugh with his witty sense of humor. In recent years, David and his life partner Karen spent many fun weekends at Foxwoods Casino as a local getaway. He also loved to spend time at the beach with family. David discovered cruising to Bermuda to be a great escape from his busy life because it included his most favorite things – good food, the ocean, sunshine, gambling and being with the one he loved most, Karen. David was an amazing person who was loved by everyone who knew him. He touched and positively impacted so many lives in his short 58 years. David was a real superhero who came to the rescue of anyone in need. David was the best Partner, Dad, Brother, Grandpa, Pappy, Uncle and friend anyone could ask for. We will always remember David as a wonderful, loving man who selflessly gave of himself to help others. He was smart, funny, dedicated, hard-working, generous and kind to everyone, and you could always count on his honesty and integrity. His legacy will live on in the people he left behind who adored him. He has left a void in our hearts and will be missed dearly. David is survived by his life partner and best friend, Karen Kennedy, of Gardner, MA; his three children, Melissa Wright of Westminster, MA, Stephanie Wright of Gardner, MA and Jeremy Wright of Gardner, MA; his adopted children, Shannon Kennedy of Gardner, MA, Mandy (Kennedy) Wood and her husband Nathan Wood of Winchendon, MA and Heather Kennedy of Athol, MA; his siblings, Denis Wright and his life partner Pattie Morrison of Cape Coral, FL, Donna (Wright) Iwicki and her husband Bob Iwicki of Nashua, NH and sister Darlene Wright of Athol, MA; Grandchildren – Vanria Clyde, Lillian Wood, Lucas Wood, Jaxen Feron, David Wright and Bailee Wright and many other relatives including nieces, nephews, cousins, aunts, uncles and friends. David was predeceased by his mother, Shirley (Springer) Wright (1985) and his father, Dana Wright (2004). A Celebration of Life will be announced at a later date. To send an online condolence please visit www.mackfamilyfh.com. Arrangements are being handled by the Mack Family Funeral Homes 105 Central St., Gardner.

David A. Wright (Dave), 58, of Gardner, MA passed away very unexpectedly at UMass Memorial Medical Center in Worcester on April 15, 2020 after suffering a stroke on April 11th. David was born in Gardner, MA on March 20, 1962 to Shirley (Springer)... View Obituary & Service Information

The family of David A. Wright created this Life Tributes page to make it easy to share your memories.