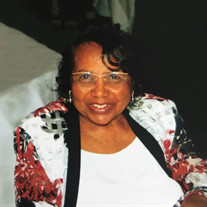 Alice Lewis, previously of Athol MA, died peacefully in the early morning hours of May 24, 2020 at the Apple Valley Center Nursing Home in Ayer, MA. Alice was born in Darlington, South Carolina on April 22, 1923, the daughter of the late Fred and Lillie Harrison. She was the youngest of 4 siblings, Fred Junior, Norman, and Grace Harrison. Alice grew up in South Carolina where she attended school and worked with her family on the farm their parents owned in Darlington. In 1943 she married Gassaway Lewis Jr. and shortly after moved to Boston Massachusetts. In 1968 they moved their family to Athol Massachusetts. Together they had 3 children Gassawallice (Wally), Monica, and Daniel Lewis and they later adopted Lee Hammonds. Alice worked in the medical field for many years as a Nursing Assistant, and later managed domestic services before retiring. Alice was a devoted and faithful servant of her Heavenly Father, Jehovah God. She was a longtime member of the Kingdom Hall of Jehovah’s Witnesses in Athol Massachusetts and served many years in the Colesville Congregation in Silver Spring, Maryland. Known lovingly to many as Aunt Alice, she was also a loving wife, mother, grandmother, and great-grandmother. She leaves behind her 3 children, Gassawallice (Wally) Lewis and his wife Marsha, Monica F. Williams and her husband Al, Daniel R. Lewis and his wife Dionesia; 5 grandchildren Afiya Lopez and husband Matthew, Jamaal Lewis, Naomi Smith and husband Winsfield (Rico), Rashida Breen and husband Jonathan, Dakari Williams and wife Sabrina; 2 great-grandchildren, Corban and Myra Lopez, and a host of nieces and nephews. Alice was predeceased by her husband Gassaway Lewis, son Lee Hammonds, brothers Fred Harrison Jr. and Norman Harrison, and sister Grace Remy. Memorial Services will be private due to Covid-19. To send an online condolence please visit: www.mackfamilyfh.com Higgin’s O’Connor Funeral Home 146 Main St. Athol MA is assistignwith arrangements

Alice Lewis, previously of Athol MA, died peacefully in the early morning hours of May 24, 2020 at the Apple Valley Center Nursing Home in Ayer, MA. Alice was born in Darlington, South Carolina on April 22, 1923, the daughter of the late Fred... View Obituary & Service Information

The family of Alice Lewis created this Life Tributes page to make it easy to share your memories.