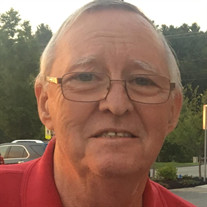 ATHOL - William S. Page Sr., 76 of Athol died Tuesday, October 1, 2019 in the Athol Hospital. He was born September 9, 1943 in Northampton, MA the son of Frank W. Page and Margaret C. (Stewart) Page. He grew up in Amherst and Petersham and graduated from Athol High School with the class of 1963. He was a member of the 1962 undefeated football team and he was also inducted into the Athol High School Sports Hall of Fame. He was a veteran serving in the U.S. Navy. Bill owned and operated Mass Natural Fertilizer Company in Westminster. He previously owned Flowerland Florist in Athol. He began working as a horse farmer and also sold farming equipment for several years for Graves Equipment and New Idea Equipment. He was a member of the Athol American Legion, past president of the Athol Lions Club, a member of the Athol-Orange Lodge of Elks and a long time member of the Petersham Country Club. He enjoyed golfing, camping in Exeter New Hampshire and for the past three years he wintered in Bradenton, Florida. He was an avid New England sports fan especially loving the New England Patriots and the Boston Red Sox. He and his wife enjoyed traveling to Italy, Mexico and the Caribbean. Always keeping up on current events he read three newspapers a day He leaves his wife of 33 years, Susan M. (Murphy) Page; a son, William S. Page, Jr. and his wife Diane of Athol and their son Alexander; a daughter, Micki Page of South Hadley and her son Garrett William Blake; two stepdaughters, Kristan Mallet and her spouse J.J. Tanguay of Dudley and her son Cooper Mallet; Kate Pesa and her husband Damir of Dudley and their children Maya Pullin, Jack Pullin, Ruby Pullin: a stepson, Glenn Mallet, Jr. and his wife Michelle of Roxbury, New Hampshire and their children Benjamin, Hillary and Molly; a brother, Charles “Chuck” Page and his wife Gayle of New Jersey; two sisters, Martha Stevens and her husband Raymond “Buster” Stevens of East Hampton; Barbara Roe of Virginia Beach, Virginia and many nieces and nephews as well as many good friends. He was predeceased by a sister, Judith Gross and by one brother, David Page. A Celebration of Life will be held on, Sunday, October 13, 2019 at the Boiler Room, 245 Tully Road, Orange from 1 to 5 PM. The family suggests that memorial donations be made in his memory to the Athol Boosters Club, c/o Marty Miarecki 389 Cobb Rd., Athol, MA 01331. To send an online condolence please visit www.mackfamilyfh.com. Fiske-Murphy & Mack Funeral Home 110 New Athol Road, Orange is assisting with arrangements.

ATHOL - William S. Page Sr., 76 of Athol died Tuesday, October 1, 2019 in the Athol Hospital. He was born September 9, 1943 in Northampton, MA the son of Frank W. Page and Margaret C. (Stewart) Page. He grew up in Amherst and Petersham and... View Obituary & Service Information

The family of William S. Page Sr. created this Life Tributes page to make it easy to share your memories.