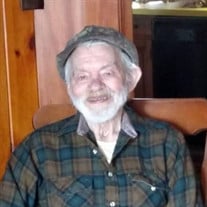 William E. “Wild Bill” Hood, 86, of Royalston, passed away peacefully with his family at his side October 15, 2021 after a long and courageous battle with dementia. Bill was born in Athol, MA to Elton and Eva Hood (Stevens). He graduated from Athol High School in 1953 and went on to serve in the USAF as a RADAR technician during the Korean Conflict. After completing his military service, Bill married Sharon (Tallman) and enjoyed 57 years of marriage until Sharon’s passing in 2019. Bill graduated from Mount Wachusett Community College with a degree in electrical engineering. He worked for and retired from UMASS Medical Center in Worcester where he worked in the biomedical engineering department. Bill enjoyed canoeing, hiking, fishing and hunting as well as birdwatching. He enjoyed traveling, in particular to Cape Breton Island where he and his wife loved visiting Mary and Lou Fleck and their large loving family. Bill also enjoyed many hunting trips to Virginia with his cousin Chuck Baker, his son Ryan and grandson Tyler. Bill fulfilled a life-long dream of going to Alaska in 2001. He drove there with his daughter setting up camp on the Kenai Peninsula. His wife flew there and they joined a fly-fishing outfit for some true backwoods fishing. Bill was an avid member of the Millers River Trout Unlimited as well as a lifelong member of the NRA. He served on a number of town committees including the Board of Health and Conservation Commission. Politics was a true passion of his, and Bill was never shy to express his opinions to anyone within earshot. Bill leaves behind a daughter, Stephanie Hood, and son Ryan Hood (Katie, his wife) all of Royalston. Bill also leaves behind two grandchildren and three great-grandchildren. Bill was predeceased by his wife Sharon, two daughters, Nicole and Christine as well as brothers Richard and Larry, and his sister Carla. Services are October 23, 2021 at Fiske Murphy & Mack Funeral Home, 110 New Athol Road, Orange, MA. Calling hours will be from 9-11 am with a brief service at 11 am. A short graveside service will be held immediately afterwards at Lawrence Brook Cemetery in Royalston. Guests are invited to the family residence on Millyard Road for an outside (under a large tent) gathering to celebrate Bill’s life. Guests are reminded that masks are required at the funeral home. In lieu of flowers, donations can be made directly to the Millers River Trout Unlimited, 1847 Pleasant St., Athol, MA 01331 Mack Family Funeral Homes-Fiske-Murphy & Mack, 110 New Athol Road is assisting with arrangements. Kevin J. Mack and Walter C. Taylor funeral directors.

William E. &#8220;Wild Bill&#8221; Hood, 86, of Royalston, passed away peacefully with his family at his side October 15, 2021 after a long and courageous battle with dementia. Bill was born in Athol, MA to Elton and Eva Hood (Stevens). He... View Obituary & Service Information

The family of William E Hood created this Life Tributes page to make it easy to share your memories.