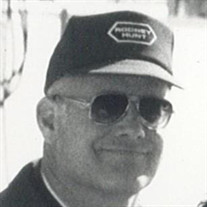 PETERSHAM-On Sunday, January 10th Peter V. West passed away at Day Brook Village in Holyoke after a lengthy illness. Peter was born on July 15, 1942 to Lois Penniman Vinton and Charles Gilbert West. He grew up in Braintree, MA and graduated from Braintree High School, a valued member of the football team. He attended Franklin Institute and was proud of his drafting ability. Peter joined the US Navy Seabees during the Vietnam conflict but was assigned to two tours at McMurdo Station, Antarctica. His duty at the South Pole was a memorable experience. After his active duty discharge he worked at Masoneilan in Norwood. He built his home in Petersham in 1972 and he started employment as an engineering draftsman at the Rodney Hunt Company in Orange for over 32 years retiring in 2006. Peter was dedicated to his family and community. He was a member of the Orthodox Congregational Church where he was a Deacon for several years. When he came to Petersham he joined the Petersham Fire Department as a volunteer and served over forty years. He was an assistant scout master and many times camped in the back part of his land with his scouts. He was enthusiastic about his time spent on the Petersham Crime Watch with Richard Nickless for many years. If friends or family called him the first thing he would say was, “How can I help you.” Peter loved to garden and kept honeybees. For many years he was a member of the Worcester County Beekeepers. He made his own wine from fruits grown on his property. A couple of bottles of wine would make it to the auction at Old Home Day in Petersham where the bidding was competitive. He is survived by his wife Grace L. Marshall. They celebrated 56 years of marriage in July 2020. He is also survived by his children, Paul V. West and his wife Cathy, Kimberly A. Morin and her husband Steven, Marny E. West, and James M. West and his wife Stacie Bassett. He has three grandchildren, Henry Morin, Violet West and Finn West Bassett. Peter has a brother David G. West and his wife Karen who live in Sebastian, Fl. His sister Shirley and her husband Jack Moriarty both predeceased him. He leaves behind many nieces and nephews. A Memorial Service to celebrate Peter’s life will be held at a later date when conditions are safer for family and friends to gather. Donations in Peter’s name may be sent to the Orthodox Congregational Church, P.O. Box 183, Petersham, MA 01366 or a charity of your choice. Higgins-O’Connor Funeral Home, 146 Main Street, Athol is assisting with arrangements.

The family of Peter V West created this Life Tributes page to make it easy to share your memories.