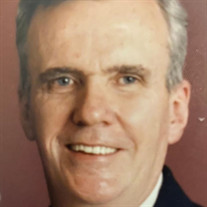 ATHOL- John Peter Buck, of Athol, died Thursday, May 27, 2021, peacefully at home with his wife Brenda by his side. He was 80 years old. John was born in Athol on May 5, 1941, the son of the late Clarence and Agnes (Geraty) Buck. He was a member of the Athol High School Graduating Class of 1959. He attended Westfield State, earning certificates for human services and recovery coaching. John enjoyed Christian music and helping people in recovery, as well as those in need. He was a friend of Bill W., celebrating nearly 34 years of sobriety. John’s greatest joy in life was his family, and holding his wife’s hand. He also loved his community, attending parades and even participating in the local Minstrel show. He especially enjoyed attending the Petersham Band Concerts and the Friday Farmers Markets. He could be found there weekly surrounded by his loved ones, catching up with friends; he was always first in line for a grilled hot dog, and was an enthusiastic supporter at the bake sale tables. He also enjoyed the beach, particularly the coast of Maine, and Matunuck, RI, where he and his family vacationed for over 40 years. For the last several years, John and Brenda enjoyed winters in Punta Gorda, FL. John began his career working at Union Twist Drill in Athol, where he was the youngest lead man and quickly rose through the ranks to become a foreman. After leaving UTD John joined with several colleagues in establishing Athol Cutter and Carbide. He went on to work for the L.S. Starrett Company for over 25 years, where he retired as a set-up man and assistant foreman. He also owned his own business, John’s Floor Coverings, for many years. John was a counselor for AdCare Hospital in Worcester, MA, where he worked as a crisis intervention counselor, served as a PCA, and facilitated after care meetings in Fitchburg, MA. John enjoyed giving back to people suffering from addiction, assisting them and working with their families for the past 30 years. In retirement, he counseled and facilitated classes at the Center for Human Development, Orange, MA. Early on in John's career, he also served as the assistant night manager at the Athol A&W Root Beer Restaurant. He was a communicant of Our Lady Immaculate, St. Peter’s, and St. Mary’s. John was an active member of his community; he was an Auxiliary Police Officer for the town of Petersham, a charter member of the Petersham Lions Club, an officer of the Jaycees Organization, and a member of the Athol-Orange Elks Lodge. John volunteered at the Monadnock Bible Conference as a cook's assistant, and served as a cook at Our Lady Immaculate suppers. He was a strong supporter of world missions. John served as an Explorer post leader for the U.T.D. Explorer Post, and was a member of Boy Scout Troop 16. John is survived by the love of his life, his wife of 60 years Brenda B. (Banks) Buck, and four children: Kris Buck and companion Bill Fifield of Orange, MA, Sue Roraback of Athol, MA, Jason Buck and his wife Betsy of Hillsborough, NH, and Peter Buck and his wife Ola Wysocki of Athol, MA; six grandchildren: Meagan, Jennifer, Katelyn, William, Christopher and Elaina; five great-grandchildren: Meredith, Lydia, Kayde, Bane, and Gideon. He also leaves numerous nieces and nephews. John was predeceased by three infant children - Roberta Agnes Buck, Faith Brenda Buck, and Catherine Jenny Buck - and his brother James Buck. Calling hours will be held Thursday, June 3, 2021, from 5:00 to 7:00 p.m. at Fiske-Murphy & Mack Funeral Home, 110 New Athol Road, Orange, MA. Funeral services will be held Friday June 4, 2021, at 11:00 a.m. at the funeral home. Burial will be private. Out of concern for the compromised immune systems in the immediate family, it is requested that attendees please wear masks unless they have been fully vaccinated. In lieu of flowers, the family requests donations be made in John’s name to Operation Smile (operationsmile.org) or Samaritan’s Purse (samaritanspurse.org) To leave an online condolence please visit www.mackfamilyfh.com Fiske-Murphy & Mack Funeral Home is assisting with arrangements.

ATHOL- John Peter Buck, of Athol, died Thursday, May 27, 2021, peacefully at home with his wife Brenda by his side. He was 80 years old. John was born in Athol on May 5, 1941, the son of the late Clarence and Agnes (Geraty) Buck. He was a member... View Obituary & Service Information

The family of John P Buck created this Life Tributes page to make it easy to share your memories.