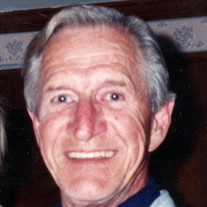 E. TEMPLETON - James R. "Bob" Sweeney of East Templeton passed away Sunday, March 1, 2020 at home. He was born December 12, 1926 in Gardner, the son of James Sweeney and Dorothy (Graves) Sweeney. Bob moved to East Templeton at the age of six, at the age of seventeen he join the United States Navy serving in the Pacific during World War II. He served on the USS Shoshone Attack Cargo Ship. He was involved in two battles, Hiroshima and Okinawa. Bob was a Signalman on the ship. After the war he came back to the states honorably discharged. He went to Worcester Trade School to become a printer. He worked at Adams Printing in Templeton for nine years. That’s when he courted his late wife Mamie Teittinen. They married in July 1949. After leaving Adams Printing in 1956 he entered into an insurance training course with Travelers Insurance Company in Worcester.. After training for a year he received his brokerage license. He started his own business eventually buying Cutting Insurance Agency in 1958. During this time he became a special agent for the New London County Insurance Company in Norwich Connecticut. After seven years he left the company. After working at his own insurance company, Cutting & Sweeney for many years, he got together with three other agents and formed Heritage Insurance Company in Gardner until his retirement in 1989. Bob and Mamie were married for 10 years before having their first daughter Jamie , 3 1/2 years later daughter Susan and three years later son Dean. Bob was happily married to his wife Mamie for 69 years until her death in September 2018. Throughout his life he enjoyed snowmobiling, boating and spent many summers at Lake Winnipesaukee. He was an avid golfer and bowler. He was a member of the East Templeton Call Fire Department for 25 years and worked with the Monadnock Council of Boy Scouting. He was a member of the Mr. and Mrs. Club, and from 1971 to 1976 he was an Assessor. He was a member of the Masonic Lodge in Gardner for many years. He is survived by his children, Jamie Edwards and her husband Gregg; Susan Couture and her husband Robert; and Dean Sweeney. grandchildren Leigh Edwards Peter Edwards, Benjamin Edwards and Heather Couture, Thomas Couture and James Giacobbi. Funeral services will be private. Burial at Pine Grove Cemetery will be private in the spring. In lieu of flowers the family suggests that donations be made to the Masonic Lodge Scholarship Fund, 42 Central Street Gardner MA 01440. To send an online condolence please visit www.mackfamilyfh.com. Mack Family Funeral Homes 105 Central St., Gardner is directing arrangements.

The family of James R. "Bob" Sweeney created this Life Tributes page to make it easy to share your memories.