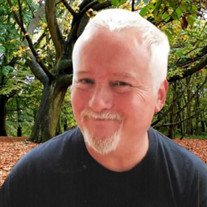 On October 22, 2021, Gary Goodrich, age 53, of Athol, Massachusetts held hands with his beloved wife as he peacefully passed away due to complications of COVID. Gary was surrounded by his family and his Chocolate Lab, Harley. Gary was born to the late Nancy (Smith) Rajotte and Frank Goodrich, both of Massachusetts, on December 13, 1967, in Haverhill, Massachusetts. He graduated from Haverhill High School in 1985. Gary enjoyed many hobbies such as dirt biking, skiing, darts, pool, Nascar, football, motorcycling, roller-skating, gardening and landscaping his home, deep sea fishing, small engine repair, camping and hosting cookouts with family and friends. Gary had an incredible gift for understanding and repairing everything and anything. He was the go-to guy you called if your appliance stopped working or if you needed to repair any small engine. He would often help friends and family with everything out of the kindness of his heart. He was a master mechanic and owned Stratovan Tire, Seabrook, NH during the 90’s. After closing his business, he mastered carpentry which he built, remodeled and gutted homes around the New England area. Gary enjoyed working with his brother, Carl Jr., at the Palace Theatre in Manchester, NH as a set designer where he built sets for theatrical performances. Gary was a Shop and Maintenance Manager at Sterling National Country Club, MA. He enjoyed driving around the Golf Course every morning to appreciate and photograph the wildlife. He took much pride in his career and looked forward to going to work every day. He enjoyed landscaping, maintaining the course and working on small engine and heavy machinery. Gary leaves behind his wife, Lauren Goodrich and children, Austin, Warren, Keira and Ashlyn and her fiancé Benjamin Marcoux, two dogs, Harley and Marley and cat Mittens. His Chocolate Lab, Harley, was his best friend and they were inseparable. Gary also leaves his brother, Michael Goodrich and wife Terri-Lynn of Florida, sister Theresa Caruso and husband Paul of New Hampshire, brother Carl Rajotte Jr of New Hampshire, sister Michelle Wittrien and husband Michael of Maryland, brother Norman Sanscartier and wife Charlene of New Hampshire, sister’s-in-law Tammy Merritt of Massachusetts and Lynnette Voss Hilton of New Hampshire, step-father Carl Rajotte Sr of New Hampshire, beloved mother and father-in-law, Neil and Eleanor Chapman of New Hampshire, foster brother, sisters, cousins, nieces, nephews and extended family and friends. Gary is pre-deceased by his daughter Tiffany Goodrich Nieves of New Hampshire and his brother Richard Merritt and nephew Stephen Merritt of Massachusetts. A Celebration of Life will be held December 10, 2021 at the American Legion Post 4, 1314 Main Street, Haverhill, Massachusetts from 6pm to 11pm. The family welcomes everyone to join with thoughts, prayers and memories of Gary.

On October 22, 2021, Gary Goodrich, age 53, of Athol, Massachusetts held hands with his beloved wife as he peacefully passed away due to complications of COVID. Gary was surrounded by his family and his Chocolate Lab, Harley. Gary was born to... View Obituary & Service Information

The family of Gary Goodrich created this Life Tributes page to make it easy to share your memories.