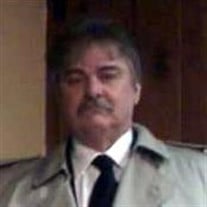 BALDWINVILLE - Charles Richard Smith, 70 of 42 Circle Street, Baldwinville, died Tuesday, February 26, 2019 at home. He was born in Gardner, on June 18, 1948, the son of the late Charles A. and the late Ruth S. (Corrigan) Smith. He grew up in Templeton. Charles was a veteran of the Vietnam War serving in the U.S. Army in Korea in 1967 and Vietnam from 1968-1969. He worked at Seaman Paper Mill for 32 years retiring in 2016. He was Union President at the Mill for many years. Charles was a member of St. Vincent de Paul Church. He was a former member of the Baldwinville American Legion and the Otter River Sportsman's Club. He loved spending time with his family especially his granddaughter. He was an avid Red Sox and Patriots fan. He enjoyed spending the Fourth of July at the beach in Plymouth with family, fishing and watching movies. He will be missed by his dog and best friend Bella. He leaves his wife of 36 years, Katherine R. (Ballentine) Smith; two daughters, Shannon L. Smith of Baldwinville, Nichole A. Morrissey and her husband Andrew of Templeton; one sister, Virginia C. Wilder and her husband Eugene of Templeton; one granddaughter, Autumn Rose Smith; two brothers in-law, Jerry Ballentine and his wife Sandy of W. Boylston, William Ballentine of Wisconsin; and many nieces and nephews. He was predeceased by two sisters, Patricia Harris and Christine Odiorne. A Mass of Christian Burial will be held Saturday, March 2, 2019 at 11:00 am in St. Vincent De Paul, 1 Forest St., Baldwinville. Burial in St. John’s Cemetery, Gardner will be at a later date. Calling hours will be held Friday, March 1, 2019 from 5 to 7 p.m. at the Mack Family Funeral Home 105 Central St., Gardner. In lieu of flowers, the family suggests that memorial contributions be made in his memory to charity of one's choice. For more information or to sign our online guest book please visit www.mackfamilyfh.com. Mack Family Funeral Home 105 Central St., Gardner is directing arrangements.

BALDWINVILLE - Charles Richard Smith, 70 of 42 Circle Street, Baldwinville, died Tuesday, February 26, 2019 at home. He was born in Gardner, on June 18, 1948, the son of the late Charles A. and the late Ruth S. (Corrigan) Smith. He grew up in... View Obituary & Service Information

The family of Charles R. Smith created this Life Tributes page to make it easy to share your memories.