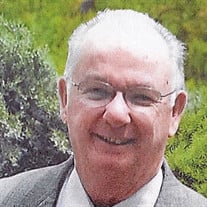 ATHOL – Richard R. Leighton, 84 of 739 Daniel Shays highway, Athol, died suddenly on Tuesday, November 2, 2021. Richard was born on April 28, 1937, the only child of Royal and Marion (Campbell) Leighton. He graduated from New Salem Academy in 1955 and then attended UMass. He owned and operated Wickman’s Barber Shop in Gardner, MA for many years. In 1956 he married his high school sweetheart, Mary Jane (Bailey). They enjoyed over 65 years together. In 1961 Richard and Mary were baptized as Jehovah’s Witnesses in the Orange, MA congregation. In 1966 they began traveling multiple times a week to assist the congregation in Brattleboro, VT where they made many lifelong friends. Richard faithfully served as an elder until his death. In 1985 they accepted the assignment to enter the traveling ministry work. They moved every 3 years encouraging congregations and teaching Bible truths for 28 years. They served various congregations in Ohio, Pennsylvania, New Jersey, New York, Delaware, Michigan, Wisconsin, W. Virginia and Kentucky. They returned home to Athol in 2017. Even during the pandemic Richard continued to share Bible truths with people through letters and telephone calls. He was an avid sports fan, routing for whichever team played better. He had a lifelong love of agriculture and technology even becoming proficient on Zoom. He enjoyed frequent vacations in Maine and sightseeing in Amish Country, Ohio. He will be greatly missed by many friends and especially his family. He leaves behind his wife Mary Jane, three children: Richard and his wife Anita Leighton of Athol, Patricia Blanchard and her husband Nolan of Tampa, FL, and James Leighton and his wife Tina of Athol; 6 grandchildren: Aaron Leighton, Jeremy Blanchard, Bethany Mazarelli, Joshua Blanchard, Becky Carter, Jacob Leighton and 9 great grandchildren: Bailey and Amelia Leighton, Gabriel, Greyson and Alec Mazarelli, Kylie, Mason, Cole and Owen Blanchard. To leave an online condolence, please visit www.mackfamilyfh.com Fiske-Murphy & Mack Funeral Home, 110 New Athol Rd., Orange is assisting with arrangements.

The family of Richard Leighton created this Life Tributes page to make it easy to share your memories.