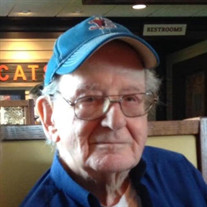 HUBBARDSTON- Richard M. Cunningham, 95, passed away peacefully at his home as gently as he’d lived, on Sunday, September 13, 2020. He was born October 21, 1924 in Gardner, son of Harold B. and Ellen A. (Fitzgerald) Cunningham.Richard attended Gardner schools, graduating from Gardner High School in 1942. He went on to serve in the Army Air Corps during WWII as a radioman, achieving the rank of Master Sergeant. He attended UMass Amherst on the GI Bill, graduating with a bachelor’s degree, the only one in his family to do so.He worked 16 years as the credit manager at Independent Lock; a Rural Route carrier for the postal service in Ashburnham and Hubbardston; a school bus driver for MAC-MAE in Hubbardston; and in later years drove Hubbardston’s senior MOC van. He was a member of the former Gardner Grange and Hubbardston Golden Agers; a master mason who served as Master of Hope Lodge in Gardner, and served on the Hubbardston Council of Aging and the Board of Registrars for many years.He is survived by his wife of 49 years, Bonnie J. (Cobb) Cunningham; three sons, Kevin M. Cunningham of Swanzey, NH, Scott E. Nims and wife, Tina of Lumberton, NC, Kenneth B. Nims of Leominster; two daughters, Kathi M. Theriault and husband, Dennis of Ashburnham, Kim E. Provencher and husband, David of Lewiston, ME; eleven grandchildren; twenty great-grandchildren; and many nieces and nephews.In addition to his parents, he was preceded in death by four brothers, Harold, George, Edward, Bill and one sister, Eleanor Ambrose.A funeral service will be held on Tuesday, September 22, 2020 at 1 pm in the Mack Family Funeral Home, 105 Central St., Gardner.  Burial will follow in the Massachusetts Veterans' Memorial Cemetery in Winchendon.  A calling hour will be held Tuesday, September 22, 2020 from 12-1 pm in the funeral home In lieu of flowers, the family asks that friends remember Dick by performing a random act of kindness, planting a tree seedling for our planet’s sake, or by donating to the Hubbardston Senior Center, Unit #3, 7 Main Street, Hubbardston MA 01452.The family would like to thank Care Central VNA and Hospice for all their great care and support to the family. To send an online condolence, please visit www.mackfamilyfh.comMack Family Funeral Home, 105 Central Street, Gardner is assisting with arrangements.

HUBBARDSTON- Richard M. Cunningham, 95, passed away peacefully at his home as gently as he&#8217;d lived, on Sunday, September 13, 2020. He was born October 21, 1924 in Gardner, son of Harold B. and Ellen A. (Fitzgerald) Cunningham.Richard attended... View Obituary & Service Information

The family of Richard M. Cunningham created this Life Tributes page to make it easy to share your memories.