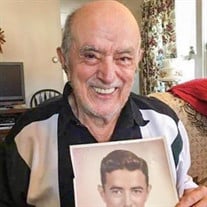 Joseph Louis Hebert – February 3, 1933 to February 11, 2019 Louis was born in South Grafton to Jacques and Adele Hebert on February 3, 1933, the youngest of their 8 beautiful children. At age 17 he joined the United States Air Force where he served proudly for 20 years as a fire fighter. After leaving the Air Force he entered the United States Postal Service, continuing civil service until his retirement in 1988. He retired to Merritt Island Florida where his warm hosting drew many family and friends to visit. Hot summer days were spent at their “Ponhook” cabin on beautiful Lake George in Nova Scotia. He loved cards and games of skill and would whoop most anyone in Scrabble. His jokes were always on-point and he had a laugh so contagious it didn’t matter if the joke was funny. His love for the Red Sox was second to none, through the highs and the lows he always knew they’d break the curse! Louis is survived by his loving wife of 64 years, Dolores, his oldest brother Joseph Elzear of Worcester, MA, his daughter Denise Hebert of Philadelphia, his son Joseph “Pete” and partner Sue Chapman of Ashby, MA, his granddaughter Adrienne Miller, son-in-law Tom, & great grandson Judah of Leominster, MA, his longtime daughter-in-law Debra Jo Hebert of Leominster, MA, and many loving nieces, nephews, and friends. He was predeceased by his Mother, Father, and 6 siblings: Lorraine, Earnest, Gerald (Blackie), Theresa, Eric, & Flora (Marie). “Uncle Louis” to many, “Pepe” to a few, “Dad” to two, and “Husband” to one, Louis’ love, loyalty, humor and good looks will live on forever in fun-filled memories and countless photos. He will be greatly missed and never forgotten. A private memorial celebration for friends and family will take place in spring.

Joseph Louis Hebert &#8211; February 3, 1933 to February 11, 2019 Louis was born in South Grafton to Jacques and Adele Hebert on February 3, 1933, the youngest of their 8 beautiful children. At age 17 he joined the United States Air Force where... View Obituary & Service Information

The family of Joseph Louis Hebert created this Life Tributes page to make it easy to share your memories.