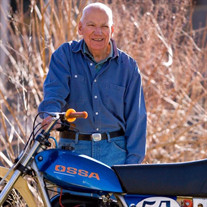 BARRE - Joseph Earl Bolger of Barre, Massachusetts, passed away peacefully at Heywood Memorial Hospital on April 21, 2020. He was Sandra (Ahlin) Bolger’s husband for 64 of his 90 years. Born in Charlottetown, Prince Edward Island, Canada on January 6, 1930 to Joseph and Elizabeth, Joe spent his childhood years in one room schoolhouses, working on his grandparent’s farm, helping in his father’s garage, and bonding with his 4 siblings: Jack, Eva, Norma, and Chuck. His formal education ended after the 8th grade. In 1946, Joe moved to Gardner, Massachusetts, finding work at Nichols & Stone. Still a Canadian citizen, he served in the U.S. Army from 1951 to 1953, stationed in Germany and France. Joe met his sweetheart, Sandra Jane, at Cape Ann Diner in Westminster. They married in 1956, and by 1968, they had 4 children: Tracey (McDonald), Heidi (Johnson), Darcy (Lohr), and Brent. After 17 years in in the furniture shop, he and a partner opened Sportsman Cycle, an early Honda motorcycle dealership in Holden, Ma. He eventually left to utilize his self-taught engineering skills and problem-solving abilities and formed his own business, Joe Bolger Products. In 1956, Joe also began pursuing his passion for motorcycle racing, which he followed for 15 years using the race number “54”. During his racing career, he was a five time New England Scrambles Champ, and was voted Sportsman of the Year several times by his peers. He was inducted into the American Motorcycle Association Hall of Fame in 2004 as a New England Motocross Champion; designer, engineer, and manufacturer of motorcycle tools, and longtime contributing magazine editor. In 2013 he was inducted into the Canadian Maritime Motorsports Hall of Fame. Joe enjoyed working in his shop, being around family, telling jokes and stories, and long rides on backroads in his homemade 3-wheel car. He was a voracious reader, and writer of treasured typewritten letters to friends and family. In addition to various automotive inventions and furniture creations, he often used his engineering talents to create medical device equipment for handicapped friends. He is survived by his wife, children, grandchildren (Rachel, Garrett, and Lauren McDonald; Jack Yost; Carly, Clayton, and Chase Lohr; Curtis and Sydney Bolger), and many beloved nieces and nephews in the United States and Canada. He was predeceased by his parents, his siblings and their spouses, and his adored son-in-law, James “Jimmy” McDonald. Due to the Covid-19 pandemic, the memorial service will be held at a later date. In lieu of flowers, please donate to the Heather Abbott Foundation or Camp No Limits in memory of Joe Bolger. To send an online condolence please visit www.mackfamilyfh.com. Mack Family Funeral Home 105 Central St., Gardner is directing arrangements.

The family of Joseph E. Bolger created this Life Tributes page to make it easy to share your memories.