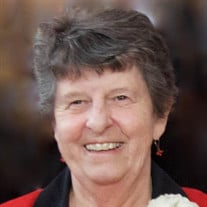 Gloria Jean (Parent) Dawson passed away peacefully on the morning of April 21, 2021, held in the arms of her daughters and surrounded by the love of family members who were blessed to visit during her final weeks. Gloria or “Toots,” as she was affectionately known by many, was born on April 7, 1939 (or April 10, depending on who you asked) in Keane Valley, New York. She spent most of her life as a friendly, active resident of Athol, Massachusetts. For 62 of those years, she was married to the love of her life and “pain in the neck,” Ralph Prentice Dawson, who has been patiently waiting for her since he left this earth last year. Together, Gloria and Ralph raised five children and later welcomed and loved their spouses: Bonnie and Bob Tirrell, Lori and Mark Ellis, Becky Dawson-Marble and Stuart Marble, Dan and Shanta Dawson and Tim Dawson; ten grandchildren and spouses: Courtney and Jay, Nichole and Chris, John and Samantha, Chelsea, Meredith, Keanan and Christy, Danielle and Jordan, Ariana and Patrick, Hannah and Cami, along with 15 (soon to be 16) great grandchildren. For years, as a testament to her caring, Gloria lovingly doted on her dear mother-in-law, Doris Emma (Drury) Dawson, the original peanut butter fudge maker. When Gloria wasn’t busy taking care of her ever-growing and well-loved family, she was taking care of everyone else. Gloria was a waitress and later, a “regulah” at roughly every restaurant in the greater Athol-Orange area, including the Athol Bake Shop, where Ralph often called her, “his little jelly donut.” Our Lady Immaculate Church rectory priests and guests were the recipients of her many meals and beautifully decorated tables. Gloria, with her little sidekick, Timmy, also blessed the Garbose family for years, with her special brand of TLC. In her spare time, Gloria was President of the local Camp Fire Girls. She also made miles and miles of fudge, brownies, apple crisp and chili for her family, Our Father’s Table, and, of course, the annual church fairs! Gloria faithfully drove her dear friends Hedy and later, Josie to weekly Bingo and dutifully saved seats (shhh!) for countless friends, arriving well in advance of the first number called. After retirement, Gloria and Ralph made yearly cross-country treks to visit family and friends. She never missed a chance to gamble in Laughlin or find a Bingo hall wherever they spent a few days. For the last two years of her life, Gloria was expertly and lovingly cared for by the memory care specialists at the Inn at Deerfield, in Deerfield, NH, to whom the family will be forever grateful. Gloria is survived by three sisters: Margaret Mojave, Cathy Method, and Shirley Boudreau, and predeceased by her eldest sister, Mary Crossman. She will be missed by many nieces and nephews. For the past 14 months, we suspect that Ralph has been at Arsenault’s coffee shop (heaven edition) waiting for, in his words, “the most beautiful woman in the world.” We will sorely miss her here, but are greatly comforted knowing that Mom is with, as she said when she first saw him at Arsenault’s, “the most handsome man I’ve ever seen!” Due to Covid considerations, the service will be private. Although the service is private, Gloria’s family welcomes anyone who would like to attend an outdoor Celebration of Life at: The Colonial Hotel, 625 Betty Spring Road, Gardner, MA 01440, on Tuesday, April 27, 2021 from 4:30-6:30 PM. In lieu of flowers, you may send donations to Gloria’s care facility, The Inn at Deerfield, PO Box 87, Deerfield, NH 03037, to benefit her sweet friends in memory care.

Gloria Jean (Parent) Dawson passed away peacefully on the morning of April 21, 2021, held in the arms of her daughters and surrounded by the love of family members who were blessed to visit during her final weeks. Gloria or &#8220;Toots,&#8221;... View Obituary & Service Information

The family of Gloria Jean (Parent) Dawson created this Life Tributes page to make it easy to share your memories.

Gloria Jean (Parent) Dawson passed away peacefully on the morning...