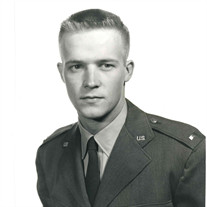 Donald MacGregor MacKay, 84, formerly of Athol, MA, died Saturday, September 21, at The Overlook skilled nursing facility in Charlton, MA. Born May 13, 1935, in Providence, RI, Donald (“Dan”) was son of the late Richmond and Barbara (Woodward) MacKay. He was a cum laude graduate of Deerfield Academy and earned a BSME degree at Cornell University as a Distinguished Military Graduate. At Cornell, he was a member of the Sigma Phi fraternity. Soon after graduation, on June 28, 1958, he married his college sweetheart, Deborah Fowler. They remained married for 59 years, until her death last year. Dan’s long career as an engineer began with his service in the Air Force, in the Liquid Rocket Division at Edwards Air Force Base. He went on to work as an analytical engineer at Pratt & Whitney Aircraft in East Hartford, CT; a development engineer at Litton Industries, Union/Butterfield Division in Athol, MA; Director of Engineering at Waukesha Cutting Tools in Waukesha, WI; Engineering Manager at The Moore Company in Springfield, MA; and again at Union/Butterfield as Director of R&D and Director of Marketing. After the Union/Butterfield plant closed in 1984, he became a manufacturer’s sales representative. He retired in 2001. Dan was very active in the civic and religious life of Athol. Over the years, he served on the Board of Investment of the Athol Savings Bank; as president of the Board of Directors of the local YMCA; on the Board of Trustees of the Athol Congregational Church; as chairman of the Athol School Committee; on the Salvation Army Advisory Board; on the local Red Cross Committee; and with the local United Way. He and Deborah served as Stephen Ministers. Dan is survived by four children: Glenn MacKay and his wife, Brenda, of Medford, MA; Allyn MacKay and his wife, Pamela, of Grosse Pointe, MI; Laura MacKay of Greenfield, MA; and Janet Moore of Greenfield, MA. His five granddaughters are Sophia, Leah, and Paisley MacKay, Emily (Moore) Larr, and Rachel Moore. He is also survived by his sister, Margaret, and her husband, Phillip Novisky, of Savage, MN, and four nieces and nephews. He was predeceased by his brother, Robert Allyn MacKay. The funeral will be held October 12 @ 10:30 a.m. in the Athol Orange Baptist Church, 131 Ridge Ave, Athol. Burial will follow at Silver Lake Cemetery. In lieu of flowers, memorial contributions may be made in Dan’s memory to the Athol YMCA, 545 Main St., Athol, MA 01331.

The family of Donald MacGregor MacKay created this Life Tributes page to make it easy to share your memories.