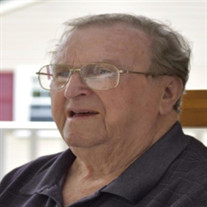 OTTER RIVER - Donald (Don) (Donuts) F. LeBlanc (91) of Otter River, MA, born October 3, 1928, husband, father, grandfather, great grandfather, brother and friend to many passed away peacefully in his sleep with his family by his side on April 21, 2020 after a period of declining health.  Don was born in Gardner, MA., the son of Frank LeBlanc and Viola (Jaillet) (LeBlanc) Theriault. Don attended Holy Rosary School and Gardner High School, class of ‘46’. Don was the husband of Grace Louise (Lang) who passed away in 2013.  They had been married for 64 years. They lived most of their life in Gardner, Ashburnham, Otter River, with the exception of five years in Siler City, North Carolina. Together they had three children, Kerry LeBlanc of Otter River, Patti Matukas and husband Tom of Otter River and Dodie Ducharme and husband Tony of Winchendon.  Don had four grandchildren and eight great grandchildren. Don was an avid card player. Always up for a good game of cribbage, pitch or solitaire. In his later years he looked forward to Tuesday and Wednesday afternoon cribbage tournaments at the Gardner and Hubbardston Senior Centers. Don enjoyed watching sports. An ardent New England Patriots and Boston Red Sox fan, he seldom missed a televised game. In his younger days Don enjoyed playing golf. He played semi pro football for the Gardner Gymnasts, played recreational basketball in the Gardner night recreation league for several years and enjoyed skiing, swimming and boxing. He was a member of the Elks for a number of years and served on many committees serving the community during his tenure there. Don was an upholsterer for most of his working life. Early on he worked for R. Smith, Custom and Modern and O’Hearns but spent most of his life working for Selig Mfg as a sample maker and finally as manager of the sample department in Leominister, MA. and finally in Siler, City North Carolina. Besides his family Don leaves behind his sister Elaine LeBlanc of Gardner, several nieces, nephews and cousins.  He was preceded in death by his parents Frank and Viola and stepfather O’Neil Theriault and his brothers Ernest and Raymond LeBlanc. Burial will be private and funeral arrangements are being coordinated by Mack Family Funeral Home, 105 Central St, Gardner. To send an online condolence please visit [email protected]" title="Click to open in a new window or tab" target="_blank" rel="nofollow noopener">[email protected] lieu of flowers memorial donations may be made to Care Central and Hospice, (former GVNA HealthCare Inc. Hospice Program), 34 Pearly Lane, Gardner, MA 01440 in the name of Donald F. LeBlanc or to the charity of one’s choice. The family would like to thank visiting nurses Samantha, Patty and Diane for the outstanding care and compassion shown Dad during his final weeks. You are all a credit to your profession.Dad wanted to send his sincerest thanks to all those still living who helped make his journey we call life a memorable, enjoyable and rewarding experience. Hopefully we all meet again, so until then best wishes.  Mack Family Funeral Home 105 Central St., Gardner is directing arrangements.

OTTER RIVER - Donald (Don) (Donuts) F. LeBlanc (91) of Otter River, MA, born October 3, 1928, husband, father, grandfather, great grandfather, brother and friend to many passed away peacefully in his sleep with his family by his side on April... View Obituary & Service Information

The family of Donald F. LeBlanc created this Life Tributes page to make it easy to share your memories.