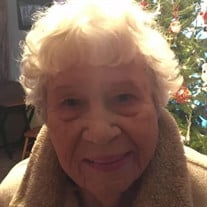 FITCHBURG- Betty “Elizabeth” K. (Riggans) Cherrier Holmes, born in Thomasville, NC, longtime resident of Fitchburg. Betty died peacefully on July 2, 2019, at 7:45 P.M. after a short illness at Health Aliance Hospital who gave her such loving and amazing care. A native Southerner, born April 6, 1932, she is predeceased by her first husband, George Cherrier, and her second husband, Lester G. Holmes, who passed in Spring of 2010. Betty met George while he was in the US Army serving on the USS Corey in Pensacola, FL. They were married in Louisdale, MS on August 19, 1949. They eventually moved Northward to meet George’s family in Vermont and settled in West Fitchburg where George worked for Weyerhaeuser/James River Co., and to be near Betty’s brothers. Together they raised a family of three children. Betty was a wonderful mother and devoted wife. She enjoyed country music, jitterbug contests, being with friends, sharing her Southern hospitality and sass. She was affectionately nicknamed “the rebel”. She was an active member of the Ladies Auxiliary of the British American Club in its heyday. George and Betty enjoyed 42 years together laughing and enjoying life. After George passed, Betty remained in Fitchburg where she later met and married Lester G. Holmes of Fitchburg. They shared 17 wonderful years together. She is also predeceased by her son, George Brian Cherrier in 2011, and two loving brothers, Johnny and Benny Riggans, and her beloved sister, Lizzy Motley. She leaves two daughters, Donna Carter and her husband, Stephen, and Tammy Cherrier; five grandchildren, Stephanie Carter and her children, Jacob and Addyson Lerman; grandson, Daniel Carter and his wife, Amanda, Brian Cherrier and his daughter, Sofia, and baby boy on the way, Brittany Cherrier and her daughter, Ava, and Brianna Cherrier; daughter in law, Melissa Cherrier. She leaves many loving family members in Vermont including Howard and Mary Hurst, Mary and Betty shared such a loving bond that was beautiful to see. She also leaves several nieces and nephews in Vermont; her niece Joan Legros and her entire family. The calling hours are Monday, July 8, from 9:00 to 11:00 A.M., with the funeral beginning at 11:00 at Simard Funeral Home, 14 Walker St., Leominster. Burial will follow in St. Joseph Cemetery.

The family of Betty (Riggans) Holmes created this Life Tributes page to make it easy to share your memories.