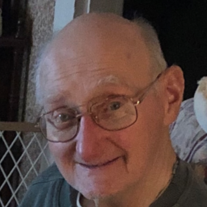 ATHOL - William Joseph “Bucky” LaRose, 81 of 45 Simonds Street, Athol, died Tuesday, November 26, 2019 at home surrounded by family. He was born in Gardner, on July 30, 1938, the son of the late William Fay LaRose and the late Angeline May (Vermette) LaRose. He grew up in Athol and graduated from Athol High School with the class of 1957. Bucky was a U.S. Marine serving from 1957-1960 and took part in Operation Blue Bat, the 1959 U.S. intervention in Lebanon. He worked at the former Union Twist Drill and Harrington Richardson as a machinist for many years. He was a member of the Athol V.F.W. Post #750 and it's drill team, a member of the Athol American Legion and a member of the Legion Color Guard. He coached Chuck Stone Little League baseball and softball for over 20 years and was an avid fan of Athol High School sports. He leaves his wife of 55 years, Shirley (Strapakas) LaRose; one son, William P. LaRose and his wife Tracy of Athol; two daughters, Anne Marie Cappucci and her husband James of Westford, Susan LaRose and her wife Chanda McCeary of Maynard; six grandchildren, Emily LaRose, William E. LaRose, Thomas LaRose, Katherine Cappucci, Matthew Cappucci and Kerry LaRose. He was predeceased by his sister, Beverly Chadbourne. Funeral services will be held Saturday, November 30, 2019 at 11:00 am in the Higgin's O'Connor Funeral Home, 146 Main St., Athol. Burial with military honors will follow in Highland Cemetery. A calling hour will be held Saturday from 10 - 11 a.m. at the funeral home. In lieu of flowers the family suggests that memorial donations be made in his memory to the Athol-Royalston Athletics Association, 2363 Main St., Athol, MA 01331 or to the American Heart Association 7272 Greenville Ave., Dallas, TX 75231. To leave an online condolence please visit www.mackfamilyfh.com. Higgin's-O'Connor Funeral Home 146 Main St., Athol is directing arrangements.
To order memorial trees or send flowers to the family in memory of William J. "Bucky" LaRose, please visit our flower store.