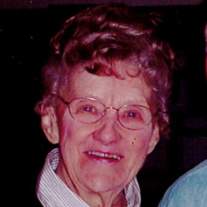 ATHOL - Natalie Irene (Stanchfield) Brighenti, 91 of Athol, died Tuesday, April 30, 2019 in the Quabbin Valley Healthcare, Athol. She was born in Athol, on August 2, 1927, the daughter of the late Frank and the late Martha (Verock) Stanchfield. Natalie grew up in Athol and was educated in Athol. She worked at Fishman’s Department Store in Athol at a young age. She worked most of her life as a cafeteria worker for the local Athol schools. Later in life she was employed at Slencil Pen and Mars Bargain Land Department Store. She was a communicant of St. Francis of Assisi Church, a member of the church choir and the Knights of Lithuania. She participated in many local Minstrel Shows in the Athol area. She enjoyed Polka Dancing and competed in many competitions throughout the northeast. She was predeceased by her husband, Reno Brighenti who passed in 1964. She leaves three sons, Anthony A. Brighenti and his wife Sharon of Athol, Robert J. Brighenti and his wife Joan of Athol, Mark P. Brighenti and his wife Jodie of Nantucket; one sister, Betty J. McGuirk of Athol; six grandchildren, Laurie Parker of Athol, Elizabeth Robinson of Athol, Angela Hicks of Seattle, WA, Rose Brighenti of Athol, Sofia Brighenti of Spencer, Catherine Brighenti of Somerville; seven great grandchildren, Samuel Parker, Luke Parker, Logan Parker, Andrew Robinson, Evelyn Robinson, Joseph Stanford, Kayla Stanford and many nieces and nephews. She was predeceased by her grandson Mark P. Brighenti, Jr. who passed in 2015. A Mass of Christian Burial will be held Saturday, May 4, 2019 at 10:00 am in St. Francis of Assisi Church, 101 Main St., Athol. Burial will follow in Gethsemane Cemetery. Calling hours will be held Friday, May 3, 2019 from 5-7 p.m. in the Fiske-Murphy & Mack Funeral Home 110 New Athol Road, Orange. Flowers may be sent or memorial contributions may be made in her memory to St. Francis of Assisi Church, 101 Main St., Athol, MA 01331. For more information or to sign our online guest book please visit www.mackfamilyfh.com. Fiske-Murphy & Mack Funeral Home 110 New Athol Road, Orange is directing arrangements.
To order memorial trees or send flowers to the family in memory of Natalie I. Brighenti, please visit our flower store.