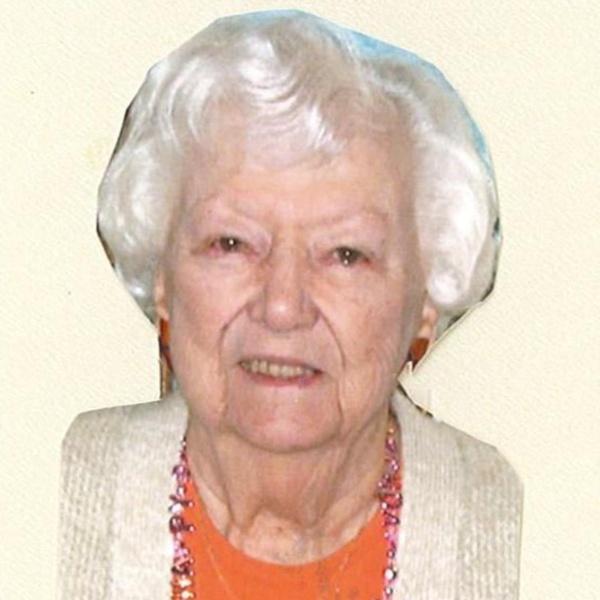 M. Rita Duguay Chiasson died on November 12 at the age of 97. She was the beloved wife of the late J. Arthur Chiasson, who passed in 2014. She was the daughter of Amie and Azilda Tremblay Duguay, and the step-daughter of Arthur Robichaud. Rita was born in Montreal, Canada on November 1, 1924. Rita’s family came to Athol at the age of two. Her father died of tuberculosis five years later. She attended Athol schools, graduating from Athol High School in 1943. She enjoyed helping organize her class reunions. Rita proudly became a citizen of the United States in 1952. She was a communicant of Our Lady Immaculate Church and a member of the Daughters of Isabella. She married her high school sweetheart in a double-ring ceremony with Arthur’s brother Edmund and his bride Florence Piette on May 25, 1946. The two couples honeymooned together at Niagara Falls. Both couples also lived on the same street in Athol for most of their lives. Rita and Art share 67 years and 8 months of marital bliss. Her first job was at Fishman’s Department Store on Main Street… a perfect place for a young girl who loved clothes. She then worked ten years at the Union Twist Drill in the Cost and File Departments and played softball on the company’s team. For many years Rita was a poll worker at town elections. Rita and Arthur loved to “jitterbug.” In their younger years, they would travel to Boston to dance to the 1940’s big bands music of Harry James, Glenn Miller and Gene Krupa. In their later years they danced and sang in the two musical revues, which raised money for the Athol Veterans Park. They enjoyed the sounds of Marty Picard’s Band, and danced at the yearly YMCA Dances and the COA’s Senior Proms. They also liked walks in their neighborhood, which included visits to Silver Lake Cemetery to water the flowers of deceased relatives and friends. Rita had been an active member of the Athol YMCA, where she participated in exercise classes. She enjoyed meeting her friends for coffee at McDonalds and shopping at “Searstown.” Well into her 90’s, she would make visits to Quabbin Valley Healthcare visiting friends. Rita was dedicated to her family with whom she treasured the holidays, cooking the entire meals at Thanksgiving, Christmas and Easter every year until her 80s. Desserts were always a big hit, especially her chocolate-frosted brownies, chocolate chip blonde brownies, pecan pie, and chocolate cream pie. Memee, a name that her grandkids and great-grandkids called her, loved chocolate!!! For 18 years Rita and Arthur wintered in Winter Haven and Lake Placid, Florida, where they liked to shop, dance, and dine. They also took her mother on many trips to Canada, where they would visit relatives. Vacations were also taken to Bermuda, Aruba, Hawaii, and the Bahamas. They loved to watch their oldest granddaughter perform in musicals, traveling to SC, PA, OH, CT and NY to enjoy shows like A Chorus Line, Fosse, and Chicago. They also vacationed at Cape Cod and Waterville Valley, NH on 4-generation vacations with her daughter’s family. Rita and Art had always enjoyed watching sports. They enjoyed Bobby Orr and the Bruins, and Tom Brady and the Patriots. Rita especially loved all of the Red Sox players and would often watch the game one night, then “Sox in 2” the next day. She also enjoyed Tennis matches, but never quite understood the rules and scoring. Rita is survived by a daughter Karen and her husband James Miller of Billerica, and her son Kary and his companion Eleanor Curtis of Athol. She will be missed by seven grandchildren: Dustienne Miller, Nicholas Chiasson and his wife Kelly, Kristalyn Keenan and her husband Kyle, Kerry--Ann Prentice and her husband Evan, Michael Chiasson, Corey Chiasson and his wife Megan, and Tyler Chiasson. She also had eight great-grandchildren: Mikayla and Aiden Nichols, Alaina, Ava, and Madison Chiasson, and Calia, Camdyn, and Cooper Keenan. She is survived by sisters-in-law Irene Chaisson , and Nancy Chiasson, and by many nieces, nephews and friends, especially her BFF Pauline Mallet, her church buddy, Mary LeBlanc, and her church-dinner pals Robert Warren and Sandra Rindone. Besides her parents and husband, she was predeceased by her loving son Kevin, who was her caregiver during the pandemic. She also was predeceased by her two brothers and their wives: Leo and Dorothy Duguay and Edmond and Bertha Duguay, her brother-in-law Edmund Chiasson and his wife Florence, her brothers-in-law Raymond Chiasson, Willard (Guggy) Chiasson, and Arthur’s parents, Henry and Albina Chiasson. Her family honors their mother’s final wish. In lieu of flowers, please send any donations to either Our Lady Immaculate Church, 192 School Street, Athol, MA 01331 or St. Jude’s Children’s Research Hospital 262 Danny Thomas Place, Memphis, TN 32105, in memory of M. Rita Chiasson. Calling hours will be held Saturday, December 4,2021 from 9:00-11:00 a.m. in the Fiske-Murphy & Mack Funeral Home, 110 New Athol Road, Orange, MA. A Mass of Christian Burial will follow at 11:30 a.m. in Our Lady Immaculate Church, 192 School Street, Athol, MA. Burial will follow in Silver Lake Cemetery. To leave an online condolence, please visit www.mackfamilyfh.com Mack Family Funeral Homes, Fiske-Murphy & Mack Chapel, 110 New Athol Road, Orange is assisting with arrangements. Kevin J. Mack and Walter C. Taylor, funeral directors.
To order memorial trees or send flowers to the family in memory of M Rita Chiasson, please visit our flower store.