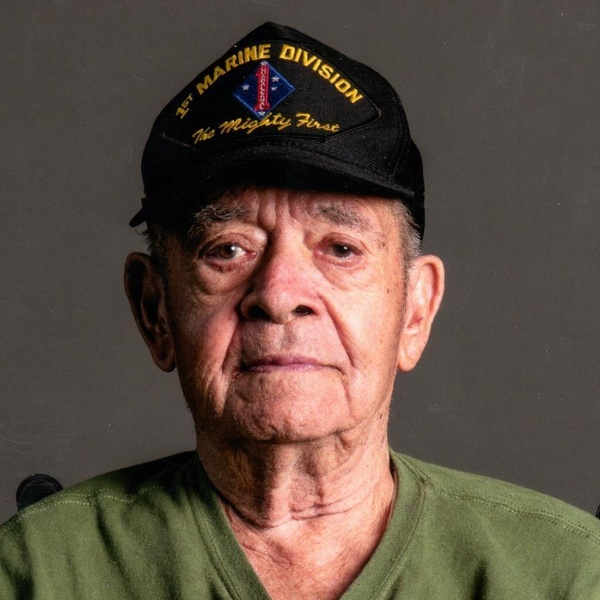 GARDNER – Emilio R. Magliacane, 96 of Gardner passed away on Monday, May 23, 2022 in Heywood Hospital, Gardner. Emilio was born August 16,1925 in Wakefield, Ma., the first child of Italian immigrants, Americo D. and Jennie C. (Tropeano) Magliacane. The first eight years of his life were spent in Wakefield, moving to Gardner when Heywood-Wakefield Co., his father's place of employment, moved to that city. Emilio must have liked Gardner, because he made his home there for the rest of his life, living nearly 64 years on Chelsea St. At 17, after watching the movie "Blood and Sand" he made the decision to enlist in the Marine Corp. during WWII. Emilio was assigned to the First Marines, 5th Division, Company A. His marine division was the first to land on Peleliu, and it was a bloody battle to take back the south Pacific Island from the Japanese. In the end, the marines accomplished what they set out to do, but at a very high cost in casualties to both sides. Emilio lost his best marine buddy to a Japanese sniper's bullet, while the two marines sat side by side eating rations. Emilio then was sent to the island of Okinawa, where he was wounded. After leaving the hospital, he was sent home with an honorable discharge and the Purple Heart. Throughout his life, he remained so proud of his service to our great country, and he never wavered in his undying loyalty to, and admiration for, the U.S. Marine Corp. During the last few years of his life, Emilio was blessed to have met Andrew Biggio, the author of the book, "The Rifle". Andrew interviewed Emilio about his WWII experiences, the memories of which always remained vivid in Emilio’s mind, and Andrew put the interview on youtube, where it can still be viewed. Andrew is writing a sequel to "The Rifle" and he told Emilio the whole first chapter is about him. It was an honor he didn't expect. Upon returning home, Emilio worked various jobs, but finally settled on working for Heywood-Wakefield Co., as his father had done. For many years, Emilio drove truck for the company, delivering furniture to many States in the eastern half of the country. He enjoyed his travels, seeing new places and making new friends, some of them life-long. He acquired the nickname "Maggie” and was always called that by his oldest and dearest friends. When Heywood-Wakefield closed its doors, Emilio worked his remaining years till retirement at North Central Correctional Institute in the maintenance department. He enjoyed his retirement, traveling with his wife, Irene, to Vegas and Disney World. He especially loved family cookouts for birthdays and holidays, and he was noted for making "the best barbecue sauce in the world". The sauce was especially great on chicken, but it was his closely guarded secret, so none of his children are able to replicate it. Emilio loved having a garden, and every year planted a variety of vegetables, with more than enough produce to share with relatives and friends. During his retirement, Emilio, and his brother, Fred, received their Gardner high school diplomas in a special ceremony honoring the men and women who joined the arm forces before graduating from high school. Emilio had many talents, including drawing and painting, and playing the piano, guitar and harmonica. His special interests included cars, guns and tractors, but most of all, he loved his family, and his special dog, Bruno, who waited patiently at the Rainbow Bridge these 32 years to welcome home his “dad”. Emilio was called home to God on May 23, 2022. He loved life and lived it to the fullest. He was preceded in death by his adored wife, Irene (Leblanc), whom he married on May 28,1949, and who died in March of 2019, his parents, his brother, Frederick and his grandson, Jonathan Birt. He is survived by his children, Janice Progin and her husband, Stephen of Gardner; Maria Saven and her husband, Wayne of Athol; Steven Magliacane and his wife, Jane, of Gardner; Joanne Maillet and her husband, Donald, of Gardner; Louise Ellowitz, and her husband, Michael, of Sebastian, Fl.; and James Magliacane and his wife, Doreen, of Crossville, Tn. He is also survived by his nine grandchildren, Mark Maillet, Tamara Maillet, Jesse Maillet, Dr. Michael Langlois, Jeffrey Langlois, Amanda (Birt) Smart, Heather Birt, Matthew Magliacane and Nicholas Magliacane, five great-granddaughters and two great-grandsons. He is also survived by his sister-in-law, Mary Alma Favreau, and many cousins, nieces and nephews, and many friends. A Mass of Christian Burial will be held on Saturday, May 28, 2022 at 11 am in Holy Spirit Church, 50 Lovewell St., Gardner. Burial with military honors will follow in St. John’s Cemetery, Gardner. A calling hour will be held on Saturday, May 28, 2022 from 9 – 10:15 am in the Mack Family Funeral Home, 105 Central St., Gardner. To send an online condolence please visit www.mackfamilyfh.com. Mack Family Funeral Home, 105 Central St., Gardner is directing arrangements. Kevin J. Mack, Douglas M. Stone & Walter C. Taylor Directors.
To order memorial trees or send flowers to the family in memory of Emilio R. Magliacane, please visit our flower store.