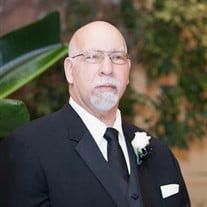 CAMBRIDGE- Stephen J. Kouyoumjian, 76, passed away on Thursday, February 3, 2022 at HealthAlliance Hospital in Leominster. He was born in Cambridge on July 26, 1945, son of the late Hovsep and Victoria (Madenjian) Kouyoumjian. Stephen attended Cambridge Rindge & Latin High School, as well as Newbury College in Brookline where he earned his Bachelor’s degree in Business. He was a sharpshooter for the United States Army during the Vietnam War from 1963-1966. Stephen had a true love for the Music Arts and taught Dumbeg at Harvard University. He was a professional Middle Eastern Musician Master Dumbeg Player. He played Dumbeg on 2 professional albums, traveled to many U.S. States to perform live at Armenian and other Mideastern events and nightclubs. Stephen also enjoyed playing Bongos, Conga Drums, American Drums, Keyboards, Guitars, Oud, Ukulele, Mandolin and other instrument's. He competed in Pistol and Rifle competitions and has many trophies. Stephen was a special police officer for the Department of Defense, as well as an instructor for the USA Olympic Shooting Team. He belonged to the Mystic Valley Gun Club for over 40 years. He belonged to a Motorcycle Club and Antique Car Club with Lisa for over 10 years. They enjoyed participating in motorcycle and antique car parades, along with Antique Car Cruise Nights. He is survived by his significant other of 25 years, Lisa Casselli and their dog, Diamond; two daughters, Carolyn V. Kouyoumjian-Farias and her husband, George A. Farias, and Mary C. Smith; a son, Paul D. Kouyoumjian; a brother, Joseph Kouyoumjian; as well as many cousins, nieces and nephews, which he had great memories with. In addition to his parents, he was predeceased by a brother, Charles Kouyoumjian. Due to covid restrictions, a celebration of life will be held at a later date. In lieu of flowers donations may be made to St. Jude Children’s Research Hospital, 501 St. Jude Place, Memphis, TN 381, www.stjude.org/donate/

CAMBRIDGE- Stephen J. Kouyoumjian, 76, passed away on Thursday, February 3, 2022 at HealthAlliance Hospital in Leominster. He was born in Cambridge on July 26, 1945, son of the late Hovsep and Victoria (Madenjian) Kouyoumjian. Stephen attended... View Obituary & Service Information

The family of Stephen J Kouyoumjian created this Life Tributes page to make it easy to share your memories.