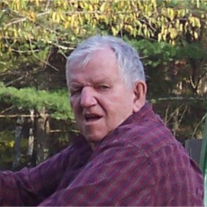 HUBBARDSTON - Stanley G Alisauskas, 87, of Hubbardston, died Tuesday, February 4, 2020 at home. He was born in Leominster, on July 13, 1932, the son of the late Stanley H. and the late Marjorie (Adkins) Alisauskas. He grew up in Westminster and Gardner and graduated from Worcester Boys Trade in 1950. Mr. Alisauskas was a veteran of the Korean War serving in the U.S. Army. He was employed at Digital Equipment Corp. in Maynard for over 24 years. After his retirement he ran his farm in Hubbardston. Stan enjoyed being on the water, fishing and beating everyone at cribbage. He leaves his wife of 31 years, Elizabeth Estabrook; two daughters, Catherine Alisauskas and her partner Bill Moffet of California, Lisa Duteau and her husband Norman of Arizona; three sons, Michael Alisauskas of Gardner and his children Kerrin and Joseph, Jeffrey Alisauskas of Winchendon and his children Kila, Allison and Zack, and Stanley Alisauskas, Jr. of Gardner and his son Nathan; Also survived by one brother, Frank Alisauskas of Athol; six great grandchildren, Jeffrey, Benjamin, Nicklos, Amelia, Neveah, Gabriella and many nieces and nephews. He was predeceased by three sisters, Marjorie Sauliner, Elizabeth Leete and Irene Seminoff. A funeral service will be held Thursday, February 13, at 11:00 at Mack Family Funeral Homes, Lamoureux-Smith & Poliks Chapel, 105 Central St., Gardner. A luncheon will be held immediately following the service at Williams Restaurant, Gardner, MA. Burial will be held in the Spring. In lieu of flowers, memorial contributions in Stanley's name may be made to the Hubbardston Firefighters Association, 7 Main St., Hubbardston, MA 01452 or the Worcester County Food Bank, 474 Boston Turnpike Rd., Shrewsbury, MA 01545 To send an online condolence, please visit www.mackfamilyfh.com. Attachments area
To order memorial trees or send flowers to the family in memory of Stanley G. Alisauskas, please visit our flower store.