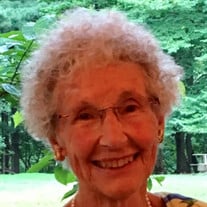 Sally (Quincy) Hartshorn, 89, of Gardner, passed away Saturday, August 10, 2019, at Gardner Rehabilitation Center after a short period of declining health. Sally was born in Boston on May 6, 1930, the only child of the late Knight and Ruth (Rockwood) Quincy. She grew up in Lancaster, N.H., Ashburnham, and Melrose, and attended Melrose High School, graduating with the Class of 1947. Sally went on to earn a degree from Skidmore College in Saratoga Springs, N.Y. in 1951.      She was married to Stanford Hartshorn, Jr., in Ashburnham on April 12, 1952. They lived their entire married life in Gardner. Stanford predeceased Sally in 2010.      Richly blessed with family and friends, Sally moved between social and civic engagements with ease, regularly hosting and attending holiday celebrations and gatherings. She was a volunteer for many years at Henry Heywood Hospital’s day surgery desk, a former trustee and clerk of Gardner’s First Congregational Church, director of the Baldwinville Nursing Home, past president of the Gardner College Club and Chowder Club, and the past treasurer of the Levi Heywood Library. Sally also worked at Massachusetts General Hospital prior to her marriage and for many years in the office of the family business, C.H. Hartshorn, Inc. of Gardner. Sally was directly responsible for protecting almost 1,700 acres of forested, publicly- accessible land in the region, earning a deserved reputation as a conservationist.      Sally had an affinity for golf, their house on Cape Cod, Lake Monomonac in Rindge, N.H., and many vacations around the world with Stan and their special friends, Ray and Douglas-Ann Bohman. They regularly played in Gardner Boat Club bridge tournaments, winning 12 championships. It was Sally’s greatest pride to watch each of her children and grandchildren grow up, earn an education, begin a career and family of their own, and return home to visit, drink coffee, and share stories.      Sally leaves her sons, Stanford III and his wife, Susan, of Gardner; and Scott and his wife Tina of Chelmsford; and daughters: Susan Dunbar and her husband, Bruce, of New Salem; Sharon Nadeau of Stoneham; Sarah Arel and her husband, Andre, of Ashburnham; and Shelley Futter and her husband, John, of Whately.      She also leaves 13 grandchildren: Gregory Dunbar of Los Angeles, Calif., and Cameron Dunbar of New Salem; Molly (Hartshorn) Green of Arlington, Va., Curtis Hartshorn of Medford and Douglas Hartshorn of Somerville; Emily (Mahoney) Salazar of Scottsdale, Ariz., and Sawyer Mahoney of Truckee, Calif.; William Nadeau of Boston and Thomas Nadeau of Stoneham; Andrew Futter of Sunderland and Catherine Futter of Whately; and Stephanie and James (Jake) Hartshorn of Chelmsford.      Calling hours will be Wednesday, August 14 from 4:00 to 7:00 at the Mack Family Funeral Home, Lamoureux-Smith and Poliks Chapel, 105 Central Street, Gardner.      A funeral service will be held at 11 AM on Thursday, August 15 at the First Congregational Church of Gardner, 28 Green Street, with a reception to follow.      Interment will follow in Crystal Lake Cemetery.      In lieu of flowers, donations are welcome to the First Congregational Church, 105 Central Street, Gardner or the Levi Heywood Memorial Library, 55 West Lynde Street, Gardner.      Mack Family Funeral Home of Gardner is directing the arrangements.

Sally (Quincy) Hartshorn, 89, of Gardner, passed away Saturday, August 10, 2019, at Gardner Rehabilitation Center after a short period of declining health. Sally was born in Boston on May 6, 1930, the only child of the late Knight and Ruth (Rockwood)... View Obituary & Service Information

The family of Sally Q. Hartshorn created this Life Tributes page to make it easy to share your memories.