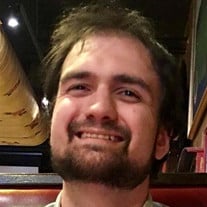 PHILLIPSTON – Ryan P. Twohey, 27 of Phillipston passed away Monday, January 7, 2019. Throughout his youth, Ryan played hockey for the Ashburnham - Westminster Hockey League. He enjoyed his summers as a child growing up on Queen Lake and always looked forward to the boat parades with family and his lifelong friend John Jackson Jr. In the later years he enjoyed the peace and quiet by relaxing in the boathouse during the fall months. In high school he was an avid runner in track and cross-country. A member of the Narragansett Marching Band. He ran the Boston Marathon with his Dad in 2009 at the age of 18. He was an Eagle Scout the highest rank in scouts, and did a summer intern with Representative Anne Gobi. He served on the Narragansett Regional School Committee and was a former mason of the Athol Lodge. Ryan was very much involved with coordinating the Harvest Runs at the Red Apple Farm and assisting with the Phillipston Fire Department’s annual 5K Runs with his Dad. He was an old soul when it came to music. He loved all kinds of music and playing his guitar. He enjoyed going to many Red Sox games and concerts with his Mom and Patriots games with his Dad. He was an avid reader, wondrous writer, and enjoyed seeing all the newest releases of films. His dogs had a special place in his heart especially Marco, Riley, and Max. He was a very kind soul and would do anything that he could for someone in need. A history buff at heart, he attended the University of Oregon. Mount Wachusett Community College and Harvard University. He wore many hats at the King Phillip Restaurant throughout the years and enjoyed hosting the most because he liked to talk and socialize with the customers, many becoming his friends. He was co-owner of Lee’s Hot Dog Stand which became his pride -n-joy. He inherited his grandmother’s green thumb, growing sequoia trees became another passion of his. He enjoyed being outside enduring nature’s beauty and traveling. One of his favorite vacations was to England, Scotland, and Paris. England being the one special place he always wanted to return to. He also traveled to Italy. He will be forever loved and missed by his parents, Jean and Craig Twohey of Phillipston, his aunts Donna Coppolino and Santa LaJoie of AthoI, and Donna McKellick of Springfield. His uncles, Dominic Coppolino of Oakham MA and Sean Twohey of Seattle WA. He will be missed by his great Aunts and Uncles and many, many cousins and friends. He was predeceased by his maternal grandparents Elnora and Dominic Coppolino and paternal grandparents June and Paul Twohey, by his uncles Brian Twohey,Robert Coppolino, and Gordon McKellick. Funeral services will be held Saturday, January 12, 2019 at 11 a.m. at the Phillipston Congregational Church, On the Common, Phillipston. Burial will be private at a later date. Calling hours will be held Friday, January 11, 2019 from 4 to 7 p.m. at the Fiske-Murphy & Mack Funeral Home, 110 New Athol Road, Orange. In lieu of flowers the family suggest that memorial donations be made in his memory to the Phillipston Congregational Church, On the Common, Phillipston, Ma 01331. To send an online condolence please visit www.mackfamilyfh.com. Fiske-Murphy & Mack Funeral Home 110 New Athol Road, Orange is directing arrangements.

PHILLIPSTON &#8211; Ryan P. Twohey, 27 of Phillipston passed away Monday, January 7, 2019. Throughout his youth, Ryan played hockey for the Ashburnham - Westminster Hockey League. He enjoyed his summers as a child growing up on Queen Lake and... View Obituary & Service Information

The family of Ryan P. Twohey created this Life Tributes page to make it easy to share your memories.