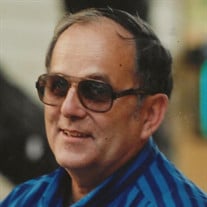 ATHOL - Russell Holt, 79, of Athol, passed away on Monday, February 1, 2021 in Athol. He grew up in Athol and graduated from Athol High School. Mr. Holt was a veteran of the Vietnam War serving in the U.S. Army where he served for 6 years,... View Obituary & Service Information

The family of Russell A. Holt created this Life Tributes page to make it easy to share your memories.

ATHOL - Russell Holt, 79, of Athol, passed away on Monday, February...