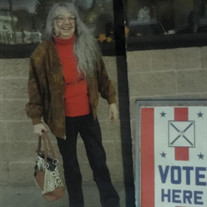 Rosemarie Mary Veronica McKenna Gowen 1933-2020 (of course). Please add one vote for Joe Biden for US President, American democracy and civil rights! Rosemarie Mary Veronica McKenna Gowen succumbed to natural causes triggered by an effort to vote in the primary for Joe Kennedy for Senate in Massachusetts and exacerbated by the stress of the occupant of the White House for the last four years and....2020. Rosemarie transitioned on September 28, 2020 surrounded by the undying love of her daughter, son-in law, extended family and friends. Rosemarie leaves behind her more than devoted and ever loving daughter, Jennifer Lee Gowen Cuneo, her beloved son-in law Joseph J. Cuneo, cats BG and Honeybun and extended family and friends. Rosemarie most loved her daughter, son-in law, animals, Jazz, singing in response to just about anything, politics, native tomatoes, baked stuffed lobster, Concord grapes, style, jade, natural stone jewelry, clouds and most of all, appreciated and had a sense of humor in any and all occasions. And she would want everyone to know that being dead was the only way to stop her from voting in this election! Rosemarie was born in Boston on January 6, 1933 to Margaret (Maggie) McKenna (1906 -2010). Housing, food and clothing were intermittent during childhood which left her with a lifelong empathy for those in need and forgotten. Rosemarie found a love for jazz in her early teens that led to a passion for civil rights. She worked as a volunteer knocking on doors for the John F. Kennedy presidential campaign and joined local civil rights marches. At 18 Rosemarie took a bus to Texas and insisted on eating at Black owned restaurants, getting her escorted on a bus back to Boston by a Texas Police Officer. But her passion for civil rights and true bean-less Texas chili never left. Her love of Jazz in Boston in the 1950s and 60s was timely as she worked as a hat check girl and frequented some of the best jazz clubs and after hour clubs of all time including The High-Hat and her favorite after hours club, The Pioneer in the south end of Boston, where she met her future husband, hung and became friends with politicians and jazz greats including Nat King Cole, dear friends Sabby Lewis, Errol Garner (who named his song Solitaire after her, due her habit of playing the solo card game while she listened to him play), Lincoln Pope and Dean Martin (who gifted her with a cat named Dancer). Other loved ones and friends that were there to greet her on the other side include her x-husband, friend and mentor William (Bill) Gowen, lifelong best friend Maureen Cloran, old friends, Sandy Kelly and Billy York, a proud USPS worker that left her daughter the legacy of a lifelong love of the USPS. And we both knew Jenn's Nana has been waiting for her too as her apparition has been sitting in her living room every morning for last few years! After her daughter Jennifer was born on May 17, 1959, Rosemarie dedicated her heart and sole to providing her with a warm, loving home and raising her to be educated, with a strong moral compass, empathy and patriotism. In addition to a deep love for her Mommy. After raising her daughter Rosemarie went on to take classes and assist people with mental challenges at the Vocational Adjustment Center in Boston. For many years she was a frequent caller to the Paul Benzequine political talk show on WEEI radio and was thrilled to get an opportunity to work for the radio station. She worked at the front desk as the Receptionist and quickly became known as The Voice (due to her beautiful speaking voice) and was tapped to do several PSA voiceovers for the station. Rosemarie then took The Voice to work for Taylor Ganson and Perrin, a prominent Law firm in downtown Boston and subsequently moved from the Chickering Piano Factory in the South end of Boston and bought a condominium in Randolph Mass. She retired in 2003 and bought a little house in the woods nearby her daughter and son-in law in Athol Mass. She has declared that her son-in law Joe grows the best native tomatoes in the world. And she would know. Rosemarie loved the city of Boston and also enjoyed the peaceful and beautiful Quabbin countryside. Rosemarie, her daughter and son-in law got to enjoy many years together working at the Orange Farmers Market selling Joe's produce, attending yard sales, country fairs, walks in the woods, cookouts and picture perfect holidays. Rosemarie will be missed every day by those left behind. And her Lovebug wants her Mommy back! In memory, please send donations in her name to Athol Animal Shelter, C/O Athol Police Department, 280 Exchange St., Athol, MA 01331 To leave an online condolence, please visit www.mackfamilyfh.com Mack Family Funeral Homes, Fiske-Murphy & Mack Chapel, 110 New Athol Rd., Orange is assisting with arrangements.

The family of Rosemarie M., V. (McKenna) Gowen created this Life Tributes page to make it easy to share your memories.