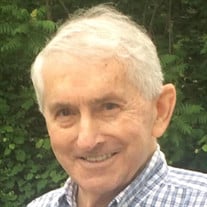 TEMPLETON - Roger Wilfred Bergevin, 86, of 143 Pail Factory Road Templeton, died Friday May 22, 2020 at Heywood Hospital in Gardner. Roger was born in Gardner on May 2, 1934 son of the late William E and Jeanne (Dumas) Bergevin and lived in Gardner until moving to Templeton in 1960. He attended Gardner public schools, was a member of the National Guard, served in the Army where he stationed overseas and received multiple commendations including 1st Class Tank Gunner. He returned home and married Barbara (Stickney) Bergevin on July 4, 1959. He was employed by the Fernald State School and later with Lombard Furniture Company as a finisher until his retirement. He enjoyed many activities including fishing and hunting with his father and sons, camping and gatherings with his entire family. He was an avid flea market enthusiast and later in life enjoyed Bingo with his sisters, trips to the casino and weekly “suppers” with his daughter. Everyone loved his laughter, smiles and heart of gold, always giving of himself for those in need even as a young boy. He is survived by two Sons, Keith A. Bergevin, Daniel R. Bergevin of Templeton and one daughter Cindy L. Barnhart of Lowell, two sisters Janet Lawrence of Templeton and Lucille Bergevin of Westminster, 6 grandchildren, 7 great grandchildren and several nieces and nephews. He is predeceased by his wife of 47 years, and love of his life Barbara (Stickney) Bergevin, his sisters Lorraine Brackett, Joan Powers and son Rick Bergevin. Funeral services and burial in the Massachusetts Veterans’ Memorial Cemetery, Winchendon will be private. In lieu of flowers, the family suggests that memorial donations be made in Roger’s memory to the Shriners Hospital for Children 516 Carew St., Springfield, MA 01104 a charity that was dear to Roger. To send an online condolence please visit www.mackfamilyfh.com. Mack Family Funeral Home 105 Central St., Gardner is directing arrangements.

TEMPLETON - Roger Wilfred Bergevin, 86, of 143 Pail Factory Road Templeton, died Friday May 22, 2020 at Heywood Hospital in Gardner. Roger was born in Gardner on May 2, 1934 son of the late William E and Jeanne (Dumas) Bergevin and lived in... View Obituary & Service Information

The family of Roger W. Bergevin created this Life Tributes page to make it easy to share your memories.