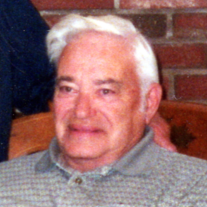 GARDNER - Robert Harold Mailloux, 93 of Gardner, died Thursday, February 13, 2020 in the Heywood Hospital.He was born in Gardner, on January 7, 1927, the son of the late Alphee and the late Alice (Valois) Mailloux. Robert grew up in Gardner and graduated from Gardner High School with the Class of 1944.  Mr. Mailloux was a veteran of World War II serving in the U.S. Navy.  He married Madeleine (Bourgeois) Mailloux on May 31, 1947 and enjoyed 64 years of marriage until her passing in 2011.He worked for Heywood Wakefield for several years then for Prudential Life Insurance Company as a Sales Agent, retiring in 1986.He was a member of Holy Rosary Church, the Napoleon Club where he served as past president and secretary.  He was a member of American Legion, Knights of Columbus and the League of Sacred Heart. He served on the Gardner School Committee from 1968-1977. Robert enjoyed playing shuffle board and golf in Florida, he was very proud of getting a hole-in-one.  He enjoyed reading, cowboy and war movies and was very interested in history.  He also liked collecting wheat pennies.  He leaves, four children, Roberta Lajoie and her husband Ronnie of Gardner, Edward Mailloux and his wife Doreen of Gloucester, Constance Breault and her husband Peter of Gardner, Joseph Mailloux and his wife Sheila of Templeton; a daughter in law, Pamela Mailloux, of Westfield, MA; one sister, Pauline Tatro of Gardner;  one brother, Roger Mailloux of Clearwater, FL; nine grandchildren, Jeff Lajoie, Bradley Lajoie, Andrew Mailloux, Alison Mailloux, Rebecca Lannon, Christopher Mailloux, Timothy Mailloux, Paul Breault, Jay Breault; 14 great grandchildren and many nieces and nephews.He was predeceased by his son, Robert C. Mailloux, his daughter, Marie Marguerite Mailloux, his grandson, Jeremy LaRoche, by one sister, Therese Twing and by one brother, Roland Mailloux.Funeral services will be held Wednesday, February 19, 2020 at 11:30 am in Mack Family Funeral Home, 105 Central St., Gardner.  Burial in Notre Dame Cemetery will be private at a later date.  Calling hours will be held Wednesday, February 19, 2020 from 9:30 - 11:30 am at the funeral home.In lieu of flowers, the family suggests that memorial contributions be made in his memory to the Jeremy LaRoche Scholarship Fund, c/o Fidelity Bank 6 City Hall Ave., Gardner, MA 01440.To send an online condolence please visit www.mackfamilyfh.com.Mack Family Funeral Home 105 Central St., Gardner is directing arrangements.
To order memorial trees or send flowers to the family in memory of Robert H. Mailloux, please visit our flower store.