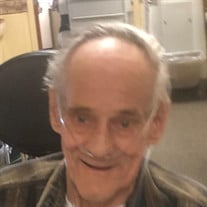 GARDNER - Robert Edward Jellison, 73 of Gardner, died Saturday, December 7, 2019 in the Wachusett Manor Nursing Home, Gardner. He was born in Waterville, Maine on April 2, 1946, the son of the late Charles and the late Florirs (Culver) Jellison. Robert was a veteran of the U.S. Army serving during the Vietnam War 1965 – 1967. He was a self-employed truck driver and was well known to be able to fix anything. He was a member of the American Legion in Winchendon, he enjoyed para-gliding and skiing. He leaves his daughter, Anne Kirby and her fiancée George Baker of Baldwinville; one son, John E. Jellison and his wife Angel of Otter River; two brothers: Mike Jellison and his wife Debbie of Virginia, Richard Jellison and his wife Mandy of Australia; three sisters, Sherry Smith of Ashland NH, Shirley Jellison of Ashland, NH, Cindy Clay and her husband Doug of Northfield, NH; two grandchildren: Wendy Kirby of Gardner, Ashley Jellison of Gardner, four great grandchildren: Anthony Silva, Stefan Walon, Marley Williams, Jayden Williams and several nieces and nephews. He was predeceased by his daughter Cheryl Jellison who passed in 1991. Funeral services will be held Friday, December 13, 2019 at 11:00 am in the Mack Family Funeral Home, 105 Central St., Gardner. Burial will follow in Greenlawn Cemetery, Baldwinville. After the burial, a celebration of life will be held at the Baldwinville Legion. Calling hours will be held Thursday from 5 to 7 p.m. at the funeral home. For more information or to sign our online guest book please visit www.mackfamilyfh.com. Mack Family Funeral Home 105 Central St., Gardner is directing arrangements.

The family of Robert E. JEllison created this Life Tributes page to make it easy to share your memories.