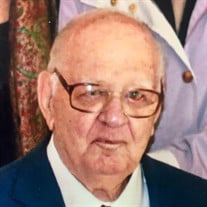 ATHOL- Robert E. Cetto, Sr., 95, of Athol, died Friday, October 18, at Heywood Hospital after an illness. Robert was born December 19, 1923, son of the late Pietro C. and Adelina (Colo) Cetto. He attended local schools where he was active in a variety of sports, playing for various leagues and clubs. His interest in sports continued with his children and in coaching for a number of years with the Athol Little League. He served in the United States Army from March 3, 1943 until his honorable discharge February 4, 1946. He received the Good Conduct Medal and the American Theater Campaign Ribbon. His high school education was interrupted before graduation but at the age of 40, he completed night school and received his high school diploma (the same year his eldest daughter graduated from high school). This was a valuable lesson to his children showing how important an education was. He worked for Massachusetts Electric Co. as a lineman for 32 years. After retirement, he and Pauline traveled extensively, seeing the natural wonders of America’s National Parks and venturing beyond our borders to many different countries. In his younger years, he enjoyed the outdoors and camping trips with his family. To his friends, he could be counted on to lend a helping hand if you were in need. To his family, he was always there in good times and trying times. He could always be counted on to make you smile and to help you stand up and get going again. He leaves his wife of 75 years, Pauline T. (Blanchard) Cetto; three sons, Peter Cetto, Robert Cetto, Jr., and Andrew Cetto; three daughters, Cynthia Cetto, Jean Lawrence and husband, Ronald Godin, and Teresa Cetto; two brothers, James Cetto and Richard Cetto; seven grandchildren, Jared Fournier, Joseph Fournier, Neal Lawrence, Shawnna Gannon, Ashton Cetto, Matthew Cetto, and Jennifer Holtus; ten great grandchildren, Alexandra, Shae, Cam, Wes, Henry, Owen, Allie, Mia, Connor, and Michael; several nieces and nephews. He was predeceased by four brothers, William, Carl, Herman, and Edward Cetto; and one sister, Margaret Cetto. A Mass of Christian Burial will be held Wednesday, October 30, at 11:00 A.M. at St. Francis Church, 101 Main St., Athol. Burial will follow in Silver Lake Cemetery. To send an online condolence, please visit www.mackfamilyfh.com. Fiske-Murphy & Mack Funeral Home, 110 New Athol Rd., Orange, is assisting the family with arrangements.

ATHOL- Robert E. Cetto, Sr., 95, of Athol, died Friday, October 18, at Heywood Hospital after an illness. Robert was born December 19, 1923, son of the late Pietro C. and Adelina (Colo) Cetto. He attended local schools where he was active in... View Obituary & Service Information

The family of Robert E. Cetto Sr. created this Life Tributes page to make it easy to share your memories.