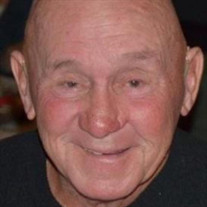 Richard A. Taylor, Sr. died Thursday, November 11, 2021 at St. Mary's Hospital in West Palm Beach, FL. He was the husband of the late Nancy A. (Sweeney) Taylor who died January 4, 1996. He leaves three sons, Richard A. Taylor II and his wife Phillis of Whitleyville, TN, Walter C. "Chris" Taylor and his wife Sharon of Winchendon, MA and Michael T. Taylor of Panama City, FL; 12 Grandchildren, Tara C. Groth, James J. Taylor, Kyle Taylor, Zachary E. Taylor, Brianna Nancylyn Taylor, Sydney N. Taylor, Ellis Taylor, Angelica Taylor, Austin Taylor, Robert Taylor and the twins Blake and Blane Taylor; five great-grandchildren, Brooklyn Groth, Bam Groth, James Taylor III and Mason Taylor and Colin Taylor He is predeceased by a son, James, J. Taylor, who died in August of 2020. Richard was born in Brooklyn, NY on March 7, 1936 a son of the late Joseph G Taylor Sr. and Helen M. (Eliss) Magalinski. He was raised in Brooklyn. He served in the US Navy as a Korean War Veteran on an aircraft carrier from 1955-1962. On June 15, 1957 he married Nancy and they lived in Flushing Queens until 1973.Then they moved to Carmel, NY, until 1980 when he moved to Boca Raton, Florida. He worked as a truck driver in his early years. As an insurance salesman; he then worked for several years as an Ironworker with the Local 40 in New York City. His most notable project was working on the South Tower of the World Trade Center Twin Towers. When construction slowed down he went back to school and got his insurance license and worked for Prudential for several years in New York. When he moved to Florida he started his own insurance agency and ran it for many years prior to his early retirement. At which time our mom convinced him to move to Gainesboro, TN, where they had a beautiful log cabin on top of a mountain. He moved back to Florida after our mom died and had traveled the US in a motorhome. He enjoyed going to the casino, golfing, in his youth playing softball in the Knights of Columbus league. He was a member of the Masons, which he was very active in his youth and was a proud member. A graveside service was held on Saturday, November 20, 2021 in the Rob Draper Memorial Cemetery, in Gainesboro, TN with Military Honors. In lieu of flowers, memorial contributions can be made in his name to the Montachusett Veterans Outreach, 268 Central Street, Gardner, MA 01440, in his memory. The Lamoureux-Smith and Poliks Chapel of the Mack Family Funeral Home has assisted Walter Taylor with his father's funeral arrangements. To leave an online condolence please visit www.mackfamilyfh.com Kevin J. Mack and Walter C. Taylor Funeral Directors.

Richard A. Taylor, Sr. died Thursday, November 11, 2021 at St. Mary's Hospital in West Palm Beach, FL. He was the husband of the late Nancy A. (Sweeney) Taylor who died January 4, 1996. He leaves three sons, Richard A. Taylor II and his wife... View Obituary & Service Information