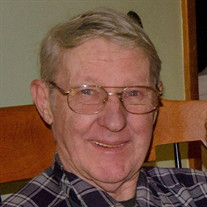 ASHBURNHAM- Richard Stevens Losh Sr., 75, passed away on Monday, April 20, 2020 at the Blair House Nursing Home in Worcester. Richard was born on April 24, 1944 in Wells County, Indiana to Charles & Eileen (Sasseville) Losh Sr. He grew up and attended school in Lancaster, MA and in 1997 moved to Ashburnham. Richard was employed by Fairlane Mobile Homes where he was a truck driver and maintenance person until his retirement. He was also a part of the Leominster Civil Defense for 15 years. He loved fishing and four-wheeling but most of all, he loved spending time with his children, grandchildren and great-grandchildren. Richard will be deeply missed by his daughter; Jean Rubin & her husband Michael of Phillipston, son; Richard Losh & his wife Georgianna of Vermont, sister; Sandra Perkins and her husband Greg of New Hampshire, brothers; Charles Losh & his wife Cindy of Lancaster, Bruce Losh Sr. & his wife Diane of Florida, and Darrell Losh Sr & his wife Elaine of Ireland, grandchildren; Richard Wheeler and his companion Samantha Pereira of Ashburnham, Teresa Sanderson and her husband Eric of Leominster, William Losh of Vermont and Shawnee Losh of Vermont, great-grandchildren; Kylie, Khloe, Victoria, Lukas, Skylar and Lucy, and the mother of his children, Wanda (Latour) LaPrise. He also leaves behind many nieces and nephews. Richard was predeceased by his parents and a twin brother, Roger Losh. A celebration of life will be held at a later time. To send an online condolence please visit www.mackfamilyfh.com. Mack Family Funeral Home 110 New Athol Rd. Orange is assisting with arrangements.

The family of Richard Stevens Losh Sr. created this Life Tributes page to make it easy to share your memories.