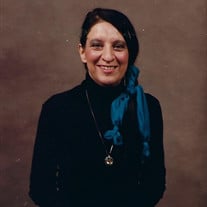 LEOMINSTER- Rena M. (Marcotte) Loughlin of Leominster was called to Heaven on February 13, after a brief illness. Rena was born in Fitchburg on May 6, 1947, to Richard and Rita (Beauchemin) Marcotte. Rena graduated from St. Bernard’s High School in 1965. As a devout Christian, Rena lived with her “mirror” as she called him, Wayne Aho for 28 years. Rena worked for the city of Fitchburg for more than 23 years after which she worked at a health food store called the Natural Shop for 10 years. She was a published poet, acknowledged by at the time, First Lady Nancy Reagan, for her poems on drug abuse. Rena’s biography is published in a book called, “Who’s Who in Poetry”. She wrote poems that were often published in the Sentinel & Enterprise. She was a Boston Sports fan, especially the Red Sox. Rena loved people and people loved her because of her laughter with a genuine, kind spirit. She loved music, animals, and especially her cats, but none like her 20 year old cat, “Stuff”. She was predeceased by her parents, and her sister, Ruby Amidon. She leaves two brothers, Brother Robert Marcotte of the Brothers of the Sacred Heart of RI, and Roger Marcotte of MA; three sisters, Rachael and Eugene Hopkins of NH, Ruth and Robert Pollentier of TX, and Rosaland and Allen Gregory of NC. Rena will be missed by her cousins, several nieces and nephews, along with Wayne’s children and grandchildren. Her bright shining light will be missed every day by all her friends and acquaintances. Visitation will be Monday, February 25, from 5:00 to 7:00 P.M. with the celebration of life starting at 7:00 P.M. at Simard Funeral Home. Simard Funeral Home, 14 Walker St., is assisting the family with arrangements.

LEOMINSTER- Rena M. (Marcotte) Loughlin of Leominster was called to Heaven on February 13, after a brief illness. Rena was born in Fitchburg on May 6, 1947, to Richard and Rita (Beauchemin) Marcotte. Rena graduated from St. Bernard&#8217;s High... View Obituary & Service Information

The family of Rena M. Loughlin created this Life Tributes page to make it easy to share your memories.