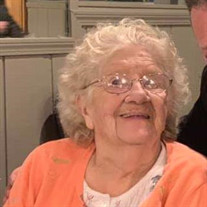 OTTER RIVER - Regina Adele Christine (Swenson) Knowlton, 91 of Otter River, went to be with the Lord on Monday, January 28, 2019. She was born in Stockholm, Maine, on January 6, 1928, the daughter of the late Swen and the late Hildur (Tall) Swenson. Mrs. Knowlton grew up in Maine, graduating from Caribou High School in 1946. She has been a resident of Otter River for 56 years. She earned an Associate degree in Art from the Mount Wachusett Community College in 1994. She worked as an Assembler for the former Simplex Time Recorder Company for many years. She was a clerk for the former Rich's Department Store in Gardner until her retirement in 1983. Mrs. Knowlton was a member of Bethany Baptist Church, the Templeton Golden Age Club, and a former member of the Lester Knowlton Post #9839 Auxiliary VFW in Caribou, Maine. She loved to cook, sew, garden, and spend time with her family and her grandchildren. She leaves two daughters, Klaudia Maillet of Gardner, and Carol Osborne of Baldwinville; two sons, Paul R. Knowlton of Spring Hill, FL, and Frank I. Knowlton of Fitzwilliam, NH; one brother, Glen O'Berg of Mansfield, TX; 21 grandchildren, 26 great grandchildren, and 9 great great grandchildren. She was predeceased by her husband of 37 years, Frank M. Knowlton who died in 1993, two daughters, April A. LeBlanc and Judith R. Lajoie, one son, Edward F. Knowlton, two brothers, Irving Skofield and Randell Swenson, and by one sister, Dorothy Skofield. Funeral services will be held Saturday, February 2, at 11:00 AM in the Bethany Baptist Church, 72 Ryan St., Gardner. Burial will follow in Wildwood Cemetery. Calling hours will be held on Friday, February 1, from 2:00 to 4:00 PM at the funeral home. In lieu of flowers, the family suggests that memorial contributions be made in her memory to American Cancer Society's New England Division Office, 30 Speen St., Framingham, MA 01701. For more information or to sign our online guest book please visit www.mackfamilyfh.com. Mack Family Funeral Home 105 Central St., Gardner is directing arrangements.

OTTER RIVER - Regina Adele Christine (Swenson) Knowlton, 91 of Otter River, went to be with the Lord on Monday, January 28, 2019. She was born in Stockholm, Maine, on January 6, 1928, the daughter of the late Swen and the late Hildur (Tall)... View Obituary & Service Information

The family of Mrs. Regina Knowlton created this Life Tributes page to make it easy to share your memories.