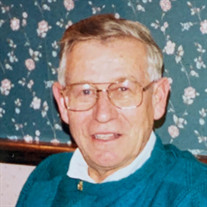 BALDWINVILLE - Raymond F. Grucan, 90 of Baldwinville, died Tuesday, May 12, 2020 in the Health Alliance at Baldwinville. He was born in Templeton on October 16, 1929, the son of the late John and the late Rose (Dlugakenska) Grucan. Ray graduated from Templeton High School in 1948 where he excelled at sports, playing baseball and basketball. He was a letter carrier for the United States Postal Service in Baldwinville for 37 years. He was a member of St. Vincent de Paul Church and a member of the National Association of Letter Carriers. After retiring he was able to enjoy the benefits of his hard work. One of his favorite pastimes was riding his bicycle with his wife Ellen, even into their seventies, pedaling through Cape Cod, the New Hampshire/Maine seacoast, and Lake Dennison. He also enjoyed playing Pitch and Cribbage, swimming, tennis, cross country skiing, fishing with his sons, and Friday night gatherings, with his family. His grandchildren brought him much happiness and he took pride in all their accomplishments. Raymond was predeceased by his wife, J. Ellen (Strott) Grucan in 2009, his son, Matthew L. Grucan, four brothers, Chester Poploski, John Grucan, Peter Grucan, Paul Grucan, and four sisters, Jeannette Arsenault, Helen Trinque, Anna Bibeau, and Frances Grucan. He leaves a son, Robert S. Grucan and his wife, Joyce of Baldwinville, two daughters, Susan E. Gallagher and her husband, John of Clinton, Jenelle R. Maloy and her husband Brian of Rindge, NH, four grandchildren, James Desmarais, Jill Grucan Dodero, Samuel, and Margaret Maloy, and one great grandchild, Elina Dodero. He is also survived by his brother Stanley Grucan of Gardner, and his sister Florence Stone of Athol. Services and burial in Pine Grove Cemetery will be private. To send an online condolence please visit www.mackfamilyfh.com. Mack Family Funeral Home 105 Central St., Gardner is directing arrangements.

BALDWINVILLE - Raymond F. Grucan, 90 of Baldwinville, died Tuesday, May 12, 2020 in the Health Alliance at Baldwinville. He was born in Templeton on October 16, 1929, the son of the late John and the late Rose (Dlugakenska) Grucan. Ray graduated... View Obituary & Service Information

The family of Raymond F. Grucan created this Life Tributes page to make it easy to share your memories.