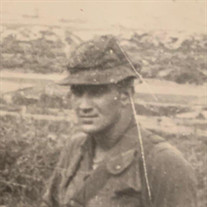 ATHOL-Peter S. Poor Jr., 77 of Athol passed away on Sunday, December 27, 2020 at home. Peter was born on October 10, 1943 in Sommerville, MA to the late Peter S. Poor Sr. and the late Marion E. (Fales) Poor. He grew up in the Medford area and enlisted in the United States Army in 1964. He was a decorated Vietnam Veteran, having served two tours in Vietnam with the 101st Airborne Division – the screaming eagles and was honorably discharge in 1970, and obtained the rank of SGT. While in the service he received the National Defense Service Medal, Vietnam Service Medal, Vietnam Campaign Ribbon w/60 Device, Parachutist Badge, Combat Infantryman Badge, Three overseas Bars, and Sharp-shooter Badge. After his eight and one half years in the military Peter was a trucker for many years, running long and short haul as well as a dispatcher for a large trucking company. After retirement he did some delivery trucking and worked as a manager at a motel. He trained working German Shepards for a number of years, but his passion was horses. He was a professional Horseman, instructor, trainer and owned riding stables. His beloved horse AQHA Ziploose N Radical was very special to him. Peter also loved Harley’s and had several over the years. As a young boy, he enjoyed playing baseball. Peter is survived by his longtime companion: Andrea M. Thompson of Athol; two sons Thomas Poor of Germany; Joshua Fowle of NC; two brothers: Wayne Poor and Richard Poor of NH, one sister: Patricia Hall of FL; a special nephew David Poor of Concord, MA; several nieces and nephews and great nieces and great nephews; and a special friend: Cynthia Rubin. Besides his parents, Peter was predeceased by his wife Margaret; two brothers: David Poor and Paul Poor. Funeral services will be held at a later date at the convenience of the family. In lieu of flowers donations may be made to Lewy Body Dementia Association, 912 Killian Hill Road S.W., Lilburn, GA 30047; lbda.org/donate/ To leave an online condolence, please visit www.mackfamilyfh.com. Fiske-Murphy & Mack Funeral Home, 110 New Athol Rd., Orange is assisting with arrangements.

The family of Peter S Poor Jr created this Life Tributes page to make it easy to share your memories.