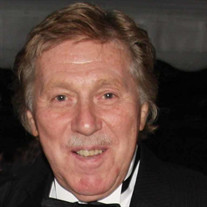 LEOMINSTER – Paul Salvatore, 78 a lifelong musician and resident, died on Saturday, January 16, 2021 after a brief illness in Health-Alliance UMass in Leominster. Paul was born on April 26, 1942 in Leominster and was the son of Theodosia Orciuch and Guido Salvatore. He was a graduate of Leominster High School and served in the U.S. Army National Guard. After graduation, he pursued his love of music and worked for Metro Music in downtown Leominster. Along with his brother Marty, they established and successfully operated The Salvatore Brothers Great Music Box in downtown Fitchburg, influencing and inspiring musicians for 27 years. Throughout his life he was a drummer in several bands including “The Cavemen” as a teenager, "Peter, Paul and Jerry” and in his current band “The Relaxatives”. Paul was active in various sports throughout his life and had a special love for speed skating and was a lifelong fan of the Pittsburgh Steelers. He was active in the community and long-time supporter of the Longsjo Classic Cycling event in Fitchburg. He was an outdoorsman, enjoying camping, fishing, hunting and nights by the campfire. Even greater than his love of music and the Steelers, Paul was a loving husband, father, grandfather, uncle, and friend. His true enjoyment came from spending time with his family and life-long friends. He will be remembered as someone who always made you laugh, his generosity, and his larger-than-life personality. He was unique, creative and was not afraid to be himself. He always made an impression and touched more people than we could ever know. He is survived by his wife of 47 years Lucille (Houle) Salvatore, his daughter Valerie Salvatore, his son James Salvatore and wife Shelley Salvatore and his two grandsons Harrison Salvatore and Corlan Salvatore. He also leaves his brother Martin Salvatore, his niece Chrissy Johnson and great-niece Chloe Johnson. In addition to his parents, he was predeceased by his brother Daniel Salvatore who died in 2017. In lieu of flowers, donations may be made in Paul’s memory to causes important to him: The Living Stone Foundation at www.livingstonefoundation.com or The Hope Lodge in Boston at www.cancer.org/hopelodgeboston. There are no calling hours and funeral services will be private. Following the service on Thursday, January 21, burial will be at St. Cecilia’s Cemetery and relatives and friends are welcome to attend. If you plan to attend you should meet at the cemetery by 12:00pm. Social distancing and masks are required. To leave an online condolence please visit www.mackfamilyfh.com Arrangements are under the care of Simard Funeral Home, Leominster. The family is also planning a Celebration of Life for Paul at a later date.

LEOMINSTER &#8211; Paul Salvatore, 78 a lifelong musician and resident, died on Saturday, January 16, 2021 after a brief illness in Health-Alliance UMass in Leominster. Paul was born on April 26, 1942 in Leominster and was the son of Theodosia... View Obituary & Service Information

The family of Paul Salvatore created this Life Tributes page to make it easy to share your memories.