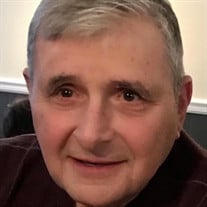 LEOMINSTER - Oreste “Rusty” Carbone, 83 of Leominster formerly of Athol, died peacefully Friday, August 6, 2021 surrounded by his loving family, after a very short illness. He was born in Gardner on March 20, 1938, the son of the late Chester Carbone and the late Cora (Pepper) Carbone. Rusty grew up in Athol and graduated from Tabor Academy. He attended Babson College. He lived in Athol most of his life, moving in 2001 to North Carolina and then to the Lunenburg/Leominster area since 2015. He was the owner of Eastern Furniture Manufacturing in Athol for many years, a business started by his father, and was operated from 1942 – 1987. As an active member of the Athol community, he served on the Executive Board at the YMCA; Board of Directors at the Athol Credit Union; Board of Directors of Athol Little League as well as coached for many years; Board of Directors of Monadnock Council of Boy Scouts; Committee Member of Troop 18 Boy Scouts at Our Lady Immaculate Church; was a member of Cheneo and the Exchange Club, and a long-time member of Our Lady Immaculate Church. Rusty was predeceased by the love of his life, Shirley, in 2019, and they celebrated 59 years of marriage. His family was the most important thing to him and they always had an open door policy at their home in Athol and camp at Packard Heights. He was a devoted husband, father, Poppa, brother and uncle. He enjoyed fishing, hunting, boating, camping, traveling, and cooking. He was famous for his “meatballs and sauce”. Rusty enjoyed most being by the water with his family, which is where he spent the last week of his life. He will be forever missed, and is now at peace with the Lord and his beloved wife. He leaves three daughters, Mia Carbone of Princeton, Cara Carbone and her husband Jim of Leominster, Danielle Battaini of Leominster, two sons, Oreste Carbone, Jr. of Orange, Chad Carbone and his wife Elizabeth of Alexandria, VA; Eight grandchildren, Zachary, Jennessa, Samantha, Tara, Rory, Shelby, Jordin, Emilia, eight great grandchildren, a sister, Phyllis Carbone of East Longmeadow, a brother and sister -in-law Robert and Pam Martin of North Carolina, nieces, nephews, many friends, and his devoted dog, Benji. The family would like to extend a special thank you to Rusty’s care givers, who are like family, Maryllyn Cruz and Anne Marie Beaudoin. A Mass of Christian Burial will be held Monday, August 16, 2021 at 11:00 am in the Our Lady Immaculate Church, 192 School St., Athol. Burial will follow in Gethsemane Cemetery, Athol. Calling hours will be held Sunday, August 15, 2021 from 2 - 4 p.m. at the funeral home. In lieu of flowers, the family suggests that memorial contributions be made in his memory to Curemelanoma.org.

LEOMINSTER - Oreste &#8220;Rusty&#8221; Carbone, 83 of Leominster formerly of Athol, died peacefully Friday, August 6, 2021 surrounded by his loving family, after a very short illness. He was born in Gardner on March 20, 1938, the son of the... View Obituary & Service Information

The family of Oreste "Rusty" Carbone created this Life Tributes page to make it easy to share your memories.